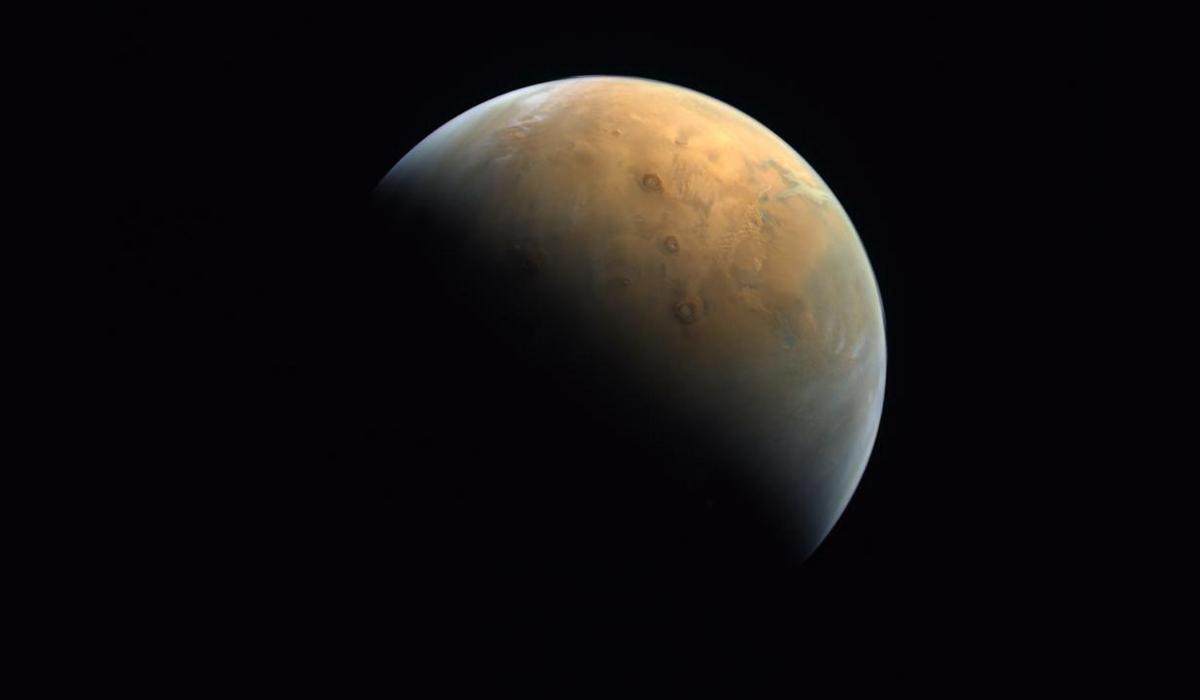 The Arab probe Hope sends the first photo of Mars, and it is spectacular for what it shows

Space exploration is no longer just for the United States, Russia and Europe. China, Japan, Israel, or the United Arab Emirates already have their own space missions.

Space exploration goes international. To the point that there is a traffic jam on Mars: three countries, United Arab Emirates, China and the United States have reached the Red Planet within just 10 days. The first to arrive was the Arab Hope probe, that has sent her first picture of mars.

And it must be recognized that it is absolutely spectacular. Not just because of the color, definition, and composition, but because of what it shows. Has been captured 24,700 kilometers away with its high resolution EXI camera.

In the upper left corner we can see the martian north pole, covered with ice (1). At dawn, in the center of the planet, looming with its 22,500 meters high and 610 kilometers long, it is the highest volcano in the Solar System, Mount Olympus (2).

What attracts the most attention are the three aligned volcanoes: Ascraeus Mons, Pavonis Mons y Arsia Mons. All of them are much higher than Everest, exceeding 14,000 meters.

The Hope probe will orbit Mars for several years at a distance of about 25,000 kilometers, without landing on the planet. It is a much wider orbit than other probes, which come much closer to image its surface.

Hope does not pretend to study its geography, but its weather, as well as the presence of water, ozone, and other compounds in the atmosphere of Mars.

The Arab probe was joined Chinese ship Tianwen-1, one day later. It will be the first to orbit the Red Planet for a few months, and in May it will land on the planet. Never has a single ship carried out these two missions at the same time.

Finalizer the NASA Perseverance rover arrives on the neighboring planet on February 18. It will land directly on its surface, without orbiting it. For the first time, NASA is going to broadcast the landing live in Spanish.

Your main milestone will be fly the first helicopter (a drone), over the surface of Mars, el Ingenuity.

Because you don't need more: a hands-free with Siri, the Google Assistant and speaker, for less than 20 euros