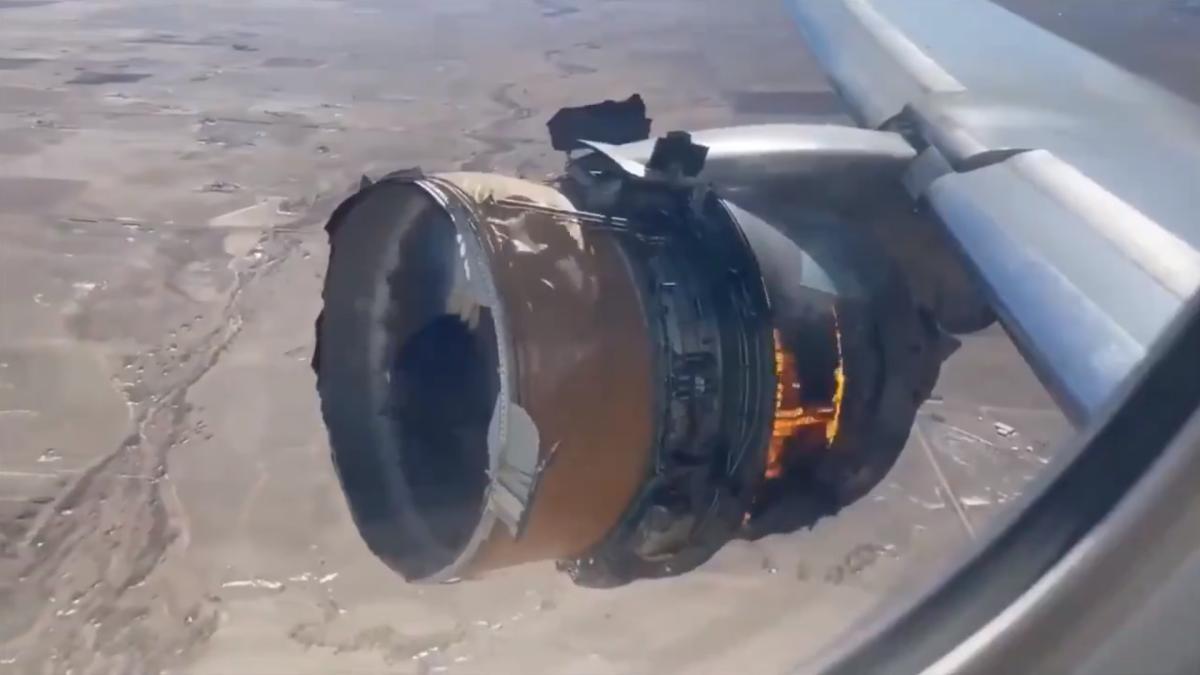 A plane loses an engine, which falls on a football field: social networks collect the entire sequence

For better or for worse, we are surrounded by cameras. The good part? Being able to see this spectacular sequence of the explosion of an airplane engine, and how it falls on a soccer field, a few inches from a house …

A few hours ago, the UA328 passenger plane, of the airline United Airlines, suffered one of the most dramatic accidents for passengers, shortly after taking off from Dever International Airport: one of its engines exploded.

The plane, with 231 passengers and 10 crew, I was flying on my way to Honolulu (Hawaii) when an explosion alerted the passengers… And to the citizens of Dever, as it could be seen and heard throughout the city: at that moment it was flying over a residential area.

Thanks to that the surprised passers-by and drivers they were able to record the entire spectacular sequence with their mobiles, which has already gone viral on social media. In this Twitter video we can see the moment of the engine explosion, when the aircraft had not yet completed the climb:

The plane’s right engine had been destroyed, dropping part of its huge fuselage on the residential area.

A dramatic moment, because if those huge pieces of metal, some over two meters long and dozens of kilos in weight, they had fallen on someone, surely we would be talking about fatalities.

In this other video it is clearly seen the engine parts that fall from the sky and hit the ground:

As we can see here, one of the largest fragments, which corresponds to the front fuselage of the engine, fell a few centimeters from a house, and a caravan:

And what happened to the plane? Although an explosion can be seen in the first tweet, it seems that only the fuselage was damaged.

In this incredible video, recorded by one of the passengers, we can appreciate how the engine keeps running practically naked, and engulfed in flames:

Breaking:@United confirms “flight 328 from Denver to Honolulu experienced an engine failure… after departure, returned safely to Denver and was met by emergency crews as a precaution… no reported injuries.” @CBSNews

Video reportedly from on board:pic.twitter.com/f87pOO9YLm

Because the engine continued to do its job relatively normally, the United Airlines plane was able to safely land back at Dever airport.

It is a sign of the enormous safety that aircraft have today, where the engine is able to continue working even after an explosion.

In fact, it could have landed with a single engine if necessary, but it would have cost the pilot much more, with a significant risk of accident.

Fortunately, all passengers and crew are safe and soundAnd the remains of the engine have not caused personal misfortune, either.

Great luck for everyone, because with the aviation sector having a bad time with the pandemic, the last thing it needed is a plane crash …

Ford created the first prototype of "flying car" and wanted to sell it to everyone, but his dream ended in an accident

What we know about the H5N8 flu that Russia has just detected in humans for the first time: a warning of the problems that are yet to come