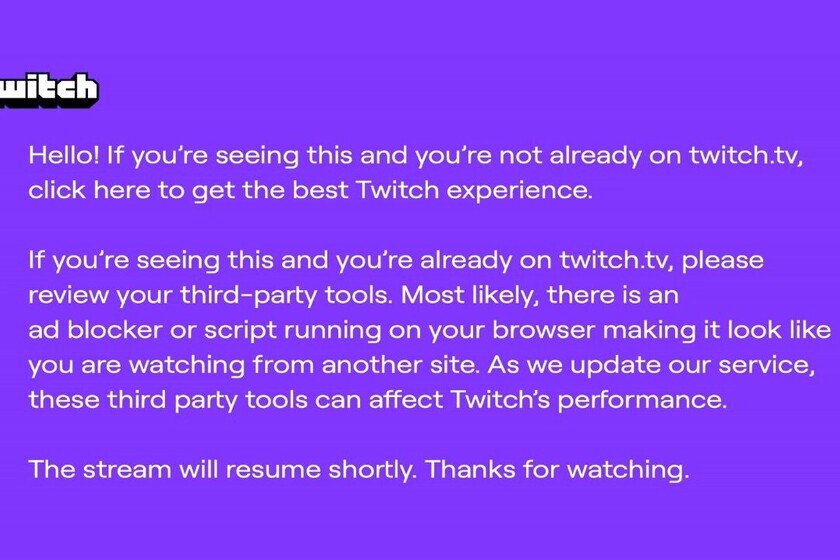 Twitch seems to be taking on ad blockers. As they are reporting countless users on Twitter, Amazon’s video game streaming platform is showing the notice on these lines, which states the following:

“Hi! If you are watching this and not yet on twitch.tv, click here for the best Twitch experience.

If you’re watching this and you’re already on twitch.tv, check out your third-party tools. Most likely there is an ad blocker or script running in your browser and make it look like you’re looking at it from somewhere else. As we update our service, these third-party tools may affect the performance of Twitch.

Streaming will resume shortly. Thanks for watching. “

The notice appears on the screen when the streaming ads should appear, about every fifteen minutes, and lasts between 10 and 30 seconds, which is how long the ads on the platform usually last. Obviously, this has generated certain complaints on Twitter, where “adblock” has become trending topic, although it is a measure that makes sense at the platform level and that has been implemented in other countries for a few months.

Ads as a source of income

Twitch Ads are one of the platform’s sources of income. If the ads are blocked by a blocker, such as the popular AdBlock, the platform stops receiving that income. That, in addition, affects the income of the streamers themselves.

Ads during streams are one of Twitch’s sources of income

The Twitch Affiliates (or Twitch affiliates) receive a part of the revenue generated through ads that appear in your streams. In fact, streamers themselves have the ability to run an “ad break” to generate revenue during breaks from ads. Without ads there is no income or, at least, it is reduced in a certain proportion.

In any case, some users they assure that it doesn’t have any kind of ad blocker or they have it disabled on Twitch, so it could also be because a browser extension (like TamperMonkey, which uses scripts) is interfering with the platform. The reason, Twitch wields in the ad, is that they are updating their service and that these third-party tools may affect the performance of Twitch.

From the Nigerian prince to WhatsApp, Lidl and the new hooks to deceive us: Special Internet scams (Clear the X # 129)

Xiaomi Redmi K40, K40 Pro and K40 Pro +: the high-end at an average price with 5G and the telephoto lens by flag