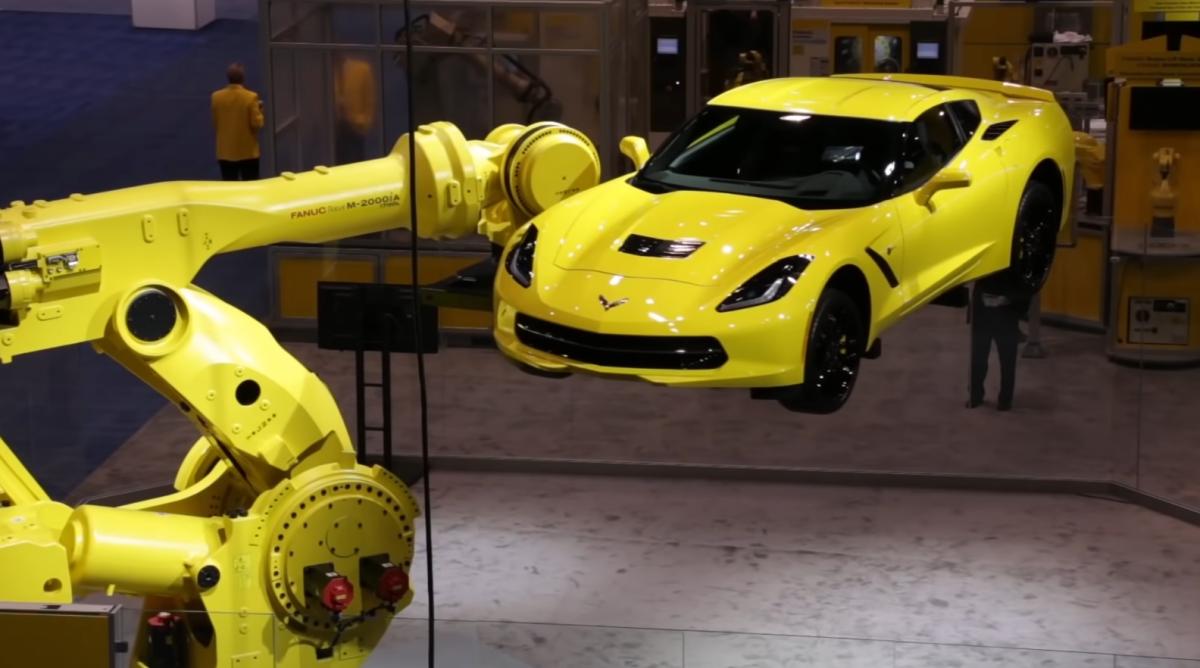 Industrial robotics never ceases to amaze us with robots that are not only stronger, but can also apply the finesse and damage control of a human.

exist industrial robots all types. Some cut, others classify, separate, screw … FANUC M-2000iA / 1700L is a parts transfer robot. Your job is simply move things from one place to another. Even if it is a 1500 Kilo sports car.

Forklifts, cranes and other mechanisms have long been used to move heavy objects from one place to another. But they are slow tools, and dangerous: if the object falls, it can cause serious damage.

FANUC M-2000iA/1700L is a parts transfer robot what can lift up to 2,300 KilosBut he treats the object like a feather, and sees to it that no harm happens to it. Here you can see him shaking a 2016 Chevrolet Corvette Stingray of 1,539 Kilos, as if it were a Hot Wheels toy car:

The interesting thing here is not that this robot lifts a car. As we have said that can be done by a forklift, or a crane.

The important thing is that the FANUC M-2000iA / 1700L uses a vision system equipped with artificial intelligence and pressure sensors to keep the object you are transporting safe at all times. Despite moving and turning it from one place to another, it always keeps it straight, and it never collides with other objects, or worse, with people.

When it detects an obstacle it stops or changes direction, avoiding accidents so common today such as being hit by a crane, or a forklift that has not seen you.

Xiaomi mop robot vacuum cleaner with intelligent LDS navigation. It has a suction power of 2100 Pa and 3 cleaning modes.

FANUC M-2000iA/1700L es the world’s most advanced industrial parts transfer robot, with a wrist with six axes that can rotate in any direction.

It is already installed in numerous factories, and is mainly used for move chassis of cars, tractors or trucks from one side to the other within the assembly lines.

FANUC is the world’s leading manufacturer of robots for industry. Founded almost 70 years ago, currently has more than 4.4 million CNC controls and 680,000 industrial robots installed.

A few weeks ago he also introduced us to his robot that sprays hand sanitizer gel, no matter where you put them.

Learn to use your 'smartphone' as a camera for your computer