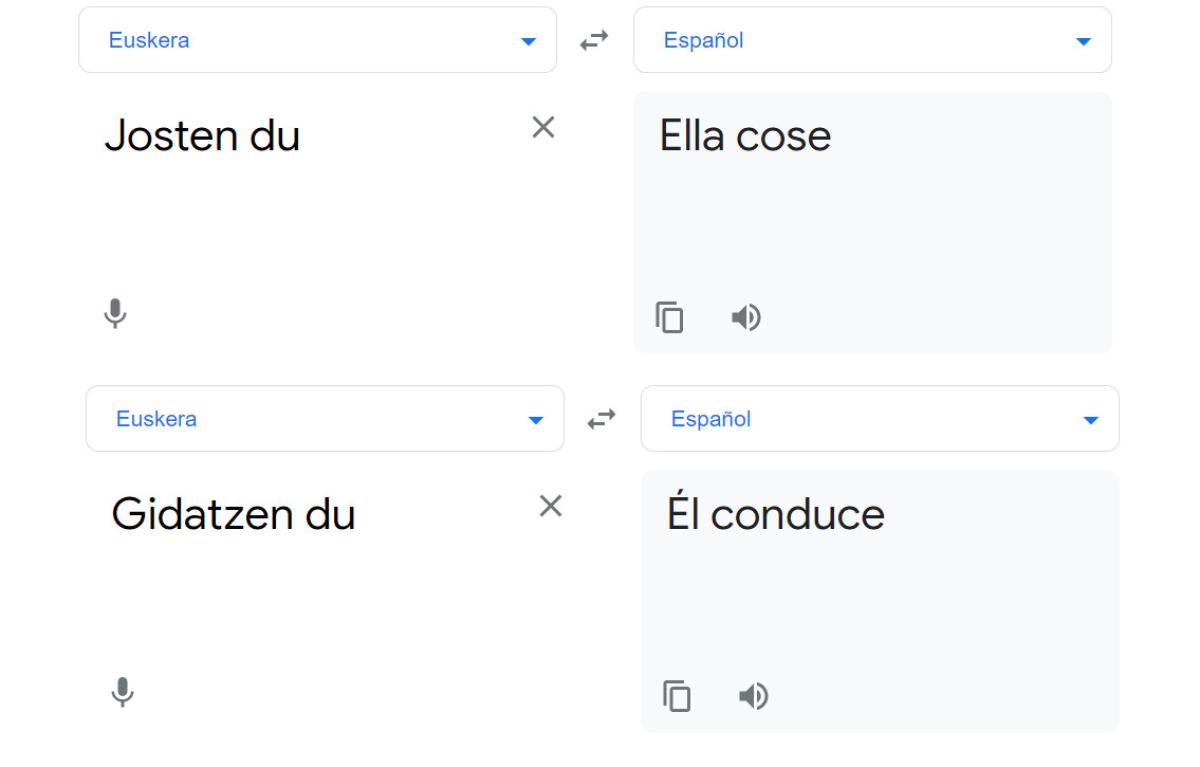 In languages ​​such as Basque or Hungarian that use neutral pronouns, Google Translate applies the masculine or feminine gender using a sometimes macho bias.

In Spanish it is almost impossible to ignore the gender of the subject performing the action, but other languages ​​use unisex pronouns with which it is not necessary to indicate the gender of that subject. Languages ​​such as Basque or Bulgarian have this quality and when translating them into Spanish we find ourselves with the problem of which gender to apply and this is where google is failing.

Once again we came across a clear macho bias in an algorithm, this time in Google’s automatic translator. The phrase “Gidatzen du” refers in Basque to a subject who drives, we do not know if he is a man or a woman. In this case, you could choose “he or she drives”, however, Google assumes the gender somewhat arbitrarily and in many cases macho.

A user of Reddit has reported that gender bias in Google Translate. From the Hungarian “Ő szép. Ő okos”, Google translates as “She is pretty. He is smart”, and so a long list of examples in which housework and childcare is associated with the female gender, while the male is indicated in other options such as professions or earn a lot of money.

In Basque the examples are similar, although not as constant. Google uses the masculine gender more in the Spanish translations that we have tested, while the feminine appears in very representative occasions as “Josten du” which interprets it as “She sews”. In the other tests where we have used verbs such as cleaning or cooking, use the neuter gender (masculine).

Conversely, when we translate from english Google does not hesitate to use both genres at the same time. English has gendered pronouns such as He or She and a neutral form that is They in the plural or Them and Their in the singular. In this case, Google translates it as He and She at the same time, discarding the gender bias that we see in other languages.

Any user can test these cases or others in the Google translator with the application or from the search engine. Although it is a significant case, it is one more example of many other biases that have been found in artificial intelligence algorithms and systems what learn from examples created by society and recreate human errors.

Google has explained to Engadget what “Google Translate works by learning patterns from millions of examples of translations that appear on the web. Unfortunately, this means that the model may inadvertently replicate gender biases that already exist.“. The company works on updating the product to correct those prejudices that could already be found in 2017.

This would explain why a more egalitarian translation is offered in English, as it has a greater variety of examples and is the first one that developers usually work with. “We hope to bring the experience to more functions and begin to address non-binary gender in translations.“indicates Google.

The first tweet in history, sold for 2.9 million dollars