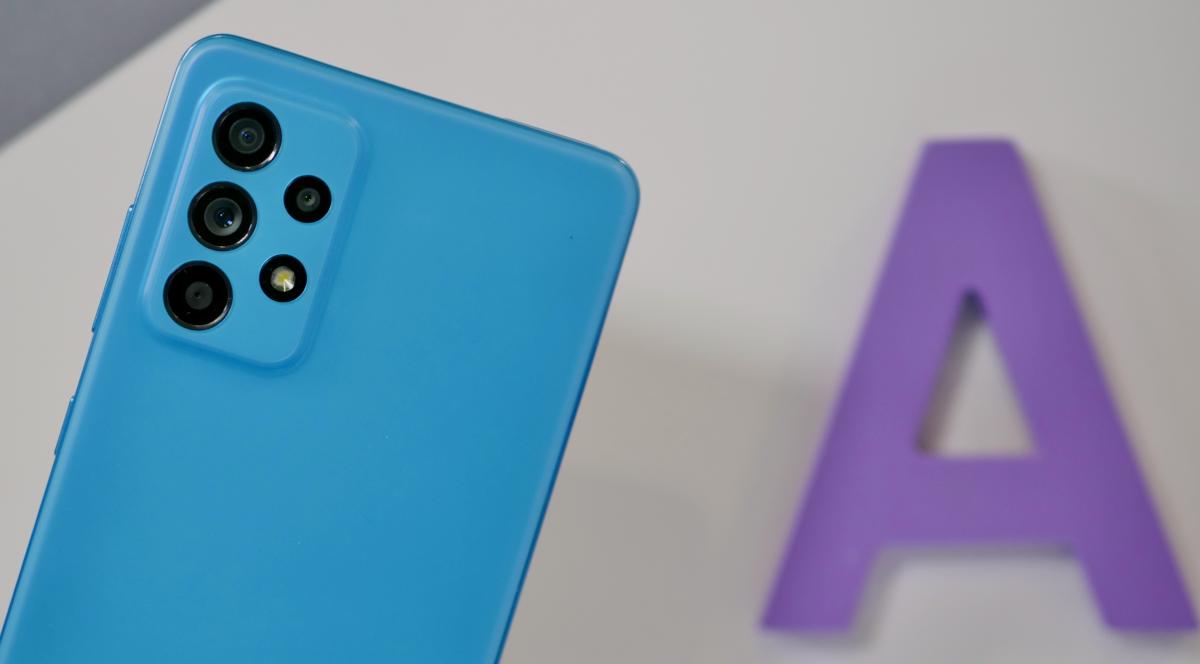 This model is Samsung’s premium mid-range mobile that offers 5G connectivity and a compendium of technical characteristics that place it in the field for those who want a good mobile with certain leading-edge features but without making the leap to mobiles of more than 500 euros.

After being able to touch the Galaxy A72, Galaxy A52 5G and Galaxy A52 models, we can tell you that they have a unified design. The physical difference is only the general size of the mobile, the A72 being larger and having more screen.

In our opinion, the choice of colors of blue and lilac in addition to the more traditional black and white they are very successful for a range of this category.

The South Korean company continues to bet on a finish in what they have called Glastik, a plastic that simulates the polished glass finish interior that we have seen in some high ranges. The touch is very good, comfortable and the footprints remain impregnated with greater difficulty. In addition, in the event of a blow, this material behaves better than glass.

The unit we have tested is that of finished in blue in a pastel shade, as we have also seen with lilac. They are not very strident colors and they can make you tolerate them without getting tired of them.

This mobile has a rear island where we can see the cameras coming out from the surface of the mobile. On that island we have four holes that correspond to a camera and a fifth to an LED flash.

The Galaxy A52 5G has a connector minijack at the bottom, next to the USB-C connector. And no, this does not make the mobile lose its IP67 certification, it is resistant to water and dust.

Speaking of the screen we can only say wonders in this first contact. We are before a panel 6.5-inch SuperAMOLED with hole in screen that promises a high level of brightness and up to 120 Hz refresh rate.

In the first instance we see how the color profile that it uses by default pushes the saturation up a bit to make the displayed content more appealing, but it is something that can be configured in its settings.

As we say, the screen is one of the best on the market in this price range and, I personally believe, that is where this year we will see a great improvement in the entire sector, moving to AMOLED in ranges where until now it was impossible or improvements in the level of brightness and refresh rate where it was already integrated.

Performance and software: Processor below the competition, but capable

In our little first contact with the new Galaxy A52 family we were able to fiddle a bit with the operating system and we saw how this Galaxy A52 5G moves lightly in the OS The 6/8 GB of RAM is enough so you can keep commonly used applications in the background and instantly jump to them.

Where we do see a data that could fall short when we talk about a mobile of more than 400 euros is in the processor. It is the least powerful Qualcomm 5G chip. That is, one of lime and one of sand.

The Snapdragon 750G is a solvent chip, pure mid-range and that we have seen in mobiles like Xiaomi’s Mi 10T Lite. Enough for occasional gaming and for the use of heavy applications but do not expect the highest fps rate or light waiting times in loading or installing apps compared to other more powerful chips. This point is a clear commitment that Samsung has reached with this model.

In terms of software we have checked how One UI 3.1 it is a natural evolution of the Samsung software layer. Removing the configuration of the system is becoming lighter every day and it is something that we like. In addition, it works on Android 11, so Samsung has put the batteries to be up to date with this model.

We have to pass the usual performance tests and thoroughly check the news of One UI to give you a thorough analysis, but for the moment it seems that we will be facing a solvent mid-range mobile in this field, with 5G connectivity, yes.

Cameras: promising setup with no telephoto

Speaking of the photographic section we can only comment that Samsung has fully opted for a configuration with four rear cameras. It is not a common configuration since, for example, we have the absence of a telephoto / optical zoom.

The Galaxy A52 5G mounts a 32 Mpx f / 2.2 front camera with fixed focus and rear configuration consists of:

As we can see, it is not a basic configuration. That 64 Mpx sensor promises a high resolution if full resolution is used and a greater amount of light if it is used by default, applying pixel binning.

We miss that telephoto, but it is clear that in good light, taking that 64 Mpx photograph allows us to make a crop equivalent to a 2x – 3x zoom and still have between 8 – 12 Mpx of resolution.

We have not been able to test them yet, but we have seen the software and it is the traditional one from Samsung, with a carousel and with extra modes at the end. This mobile, like the vast majority of this year, has functionalities that are fashionable on TikTok, such as the option to clone us when a video is recorded on a tripod.

In our analysis we will make a thorough use of it and we will see how far that main sensor and the wide angle can yield in addition to the portrait mode cutout that in Samsung always tends to work very well.

Let’s talk about features that make this mobile stand out over other mobiles in this segment and that is that Samsung has managed to integrate features that we do not see in this range of competing companies.

Highlights the IP67 certification and the support Dolby Atmos stereo both using headphones and through the stereo speakers that the mobile phone integrates. It also has a fingerprint reader to help unlocking and is integrated into the screen.

As we can see, they are small details that add up and Samsung knows it. So is the integration of a 4,500 mAh battery, more than enough to be able to reach the end of the day even with high mobile use.

Something that should be noted is that this mobile supports PPS fast charging up to 25W But the charger that comes in the box is the traditional 15W Samsung Fast Charging Charger. But hey, at least there is a charger that is more than what other companies include in the box.

Conclusions: a promising mobile and surely a great recommendation

In our contact we have seen how Samsung has managed to manufacture a mobile with a great balance in terms of specifications and design. The compromises seem to make a lot of logic to get a mobile that is good for the majority of users.

At the level of I design the finish in glastik It does not seem to us of bad quality, but the opposite. The feeling is very good in hand, it is not excessively light or heavy, so, as we say, a very correct feeling.

We have to test a thousand functions, test the performance of CPU and GPU, check the loading time of the terminal with the charger that comes in the box, which is the one that most users will use as well as seeing the autonomy that can be achieved with those 4,500 mAh.

We are already testing this Galaxy in our day to day and in a matter of a few days we will show you the complete analysis of it, what we can say right now is that yes, it is a promising mobile.

There is a lot of competition in the segment that is largely breaking the mid-range, but in the details is the difference And, of course: IP67, 5G connectivity, minijack, microSD are pluses to consider with this Galaxy A52 5G.