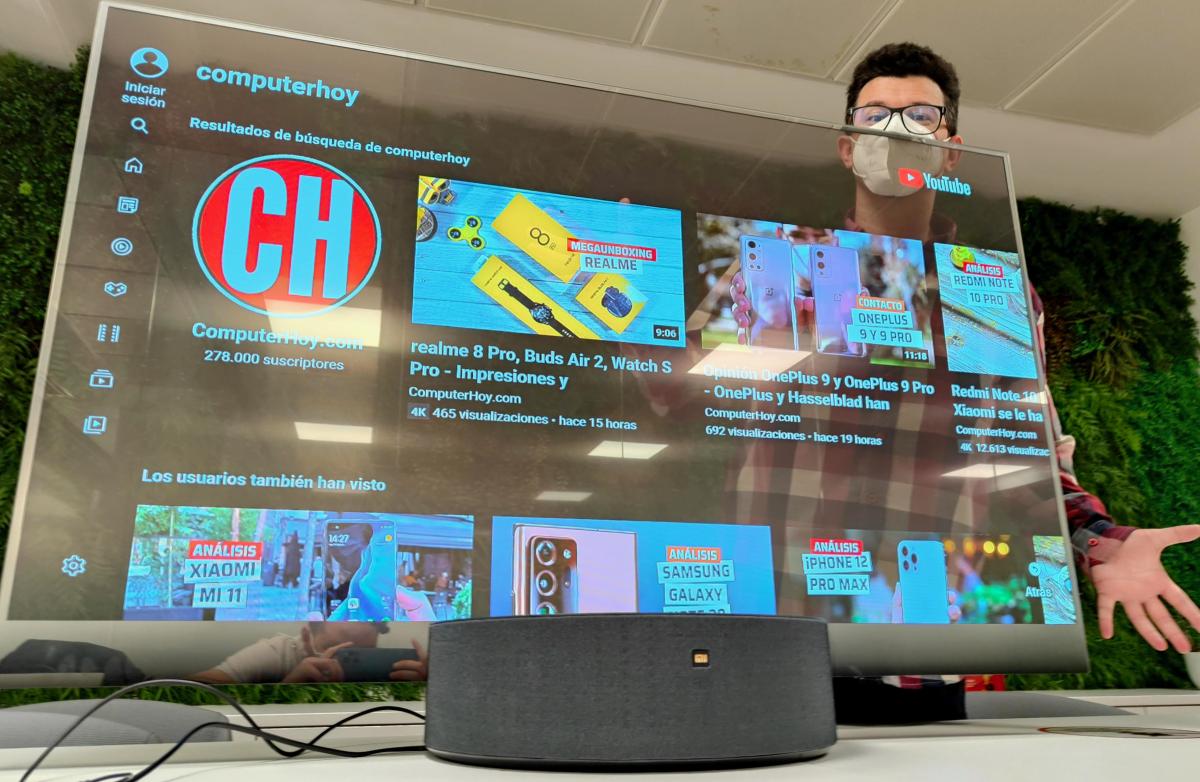 Mi TV LUX Transparent Edition: we have tested the Xiaomi TV that seems to come from the future

Already in August we saw how Xiaomi announced this transparent model, in the midst of a pandemic, yes, and already then it seemed a device that comes from the future.

Have a transparent screen design, that is to say that it lets you see what is behind it is rare if we are talking about a TV. It is similar in concept to airplane or car HUDs but with 4K resolution and 10-bit color depth.

One of the benefits of OLED technology it is the possibility of being able to completely turn off the pixels, which are the ones that generate the light. If you have a black background behind, you can see that deep black and it is the biggest advantage over other technologies such as QLED or miniLED. That pixel-by-pixel dark control.

However,what if there is no background behind? Do the images seem to float on the window? Do we need total darkness in the room? We tell you.

Design and finishes: It is a TV with a top aesthetic and design

This Xiaomi Mi TV LUX is a unique device. There are no more models on the market that follow this concept and that is why it attracts attention. In short, it is as if we had a 55-inch window in which content was projected.

But nothing is further from the truth: they are not projected, there are small pixels that turn on and off just like OLED technology works.

The base is cylindrical and on that base is located the large screen that is only 5.7mm thick It is surrounded by a small protective frame at the rear. That base is where all the electronics, connections, and speakers are.

That is, we are facing an OLED panel glued to the back of the front glass and a metal frame surrounds it on the back.

The materials used in the total set give the sensation of being a top model, not only because of what the transparent design is striking, but also at the level of finishes.

The remote control is the traditional Xiaomi TVs with a circular control system with a central button and a menu button, back and Home.

OLED stands for Organic Light Emitting Diode. This technology is based on diodes that emit light by applying electrical current to them without the need for an additional light source, this is its main characteristic.

This technology began its development around 1970, but it has not been until this last decade when we have seen a multitude of devices that apply OLED technology or some of its variants for their screens.

It is, therefore, a very thin film of organic components that, on contact with electrical stimulation, light up in one or another color. Each of these diodes is a pixel, and as they light up together they shape the image images.

One of the most relevant characteristics of OLED technology is that it has a flexible structure, allowing that in the future to create folding screens, for example Galaxy Fold 2, on all types of surfaces.

They are capable of generating their own light, that is, they do not need LED backlighting for the images to be seen.

The screen that integrates this model is a panel OLED 55 stick capable of reproducing 93% of the DCI-P3 color space. The panel refresh rate is 120 Hz and it has MEMC technology (Motion Estimation, Motion Compensantion) with which it manages to interpolate images if the source is less than 120 fps to achieve greater fluidity.

Is a 10 bit panel so, in addition, it natively reproduces HDR content, and has a maximum brightness peak according to our initial tests in this touchdown of 475 Lux.

We have to try with more content and in different ambient light settings, to give a final verdict, but the screen is not bad in brightness. Where we see a weak point is that we depend on the environment to achieve a depth of black which is where OLED displays shine.

That is why the contrast that Xiaomi comments that this screen offers is not going to figures of millions to one and remains at 150,000: 1.

Our feeling looking at the panel is that it has a transparency that will be around 40-44% but they are figures that we will have to check when analyzing it, since Xiaomi has not provided that figure either.

Watching HDR content we see how the software is able to send an extra brightness to the pixels and it is where this TV can be enjoyed the most.

In an environment with some light, such as a living room in a house during the day, the absence of blacks is strange. It’s a weird feeling. The first impression is of seeing an image that floats but, to my liking, it lacks that punch of the pure blacks of the OLED.

Software and sound: MIUI TV is shown as very capable system and supports HDR and Atmos

If we go to see the software of the unit that we have tested in the Xiaomi facilities, we can comment that we are facing MIUI TV bowed, and it is a very complete software version that allows you to use the TV as an entertainment center with games and applications, but yes, with Chinese services.

We have used the TV as a screen from a My TV via HDMI and from there we have access to Google services, Apps such as Netflix or YouTube and other streaming services.

The processor that integrates is the MediaTek 9659 that is inside it and is in charge of making everything run smoothly. In addition, the MEMC interpolation is quite precise and if we configure it a little we can avoid the typical soap opera effect.

Speaking of sound, Xiaomi integrates an AI Master sound system that promises to adapt the sound settings according to what is playing and is also compatible with Dolby Atmos.

It does not sound bad, but, without a doubt, it is not the strongest or most striking point of this Xiaomi TV LUX.

Conclusions: Beyond hype, we could be facing the future of TVs

After spending an hour with the TV, I can confirm that we are looking at a device that it will not replace current TVs short term.

It is a device that looks more like a concept than a final product for the consumer market. TV Mi LUX Transparent Edition It is a model that can fit very well in hotels, event rooms, but for a day to day watching content it is difficult to justify.

If that the concept of having a transparent screen is interesting and that can serve as a separator of spaces or environments, being transparent when it is turned off.

What is clear is that it is currently a device that will only go on sale in China, Xiaomi has confirmed that it does not reach Europe and will therefore not have software optimized with Google TV.

We would like to be able to test it thoroughly, but it is clear that it will be very complicated and even more so if it is not going to reach Spain. What you think about it?