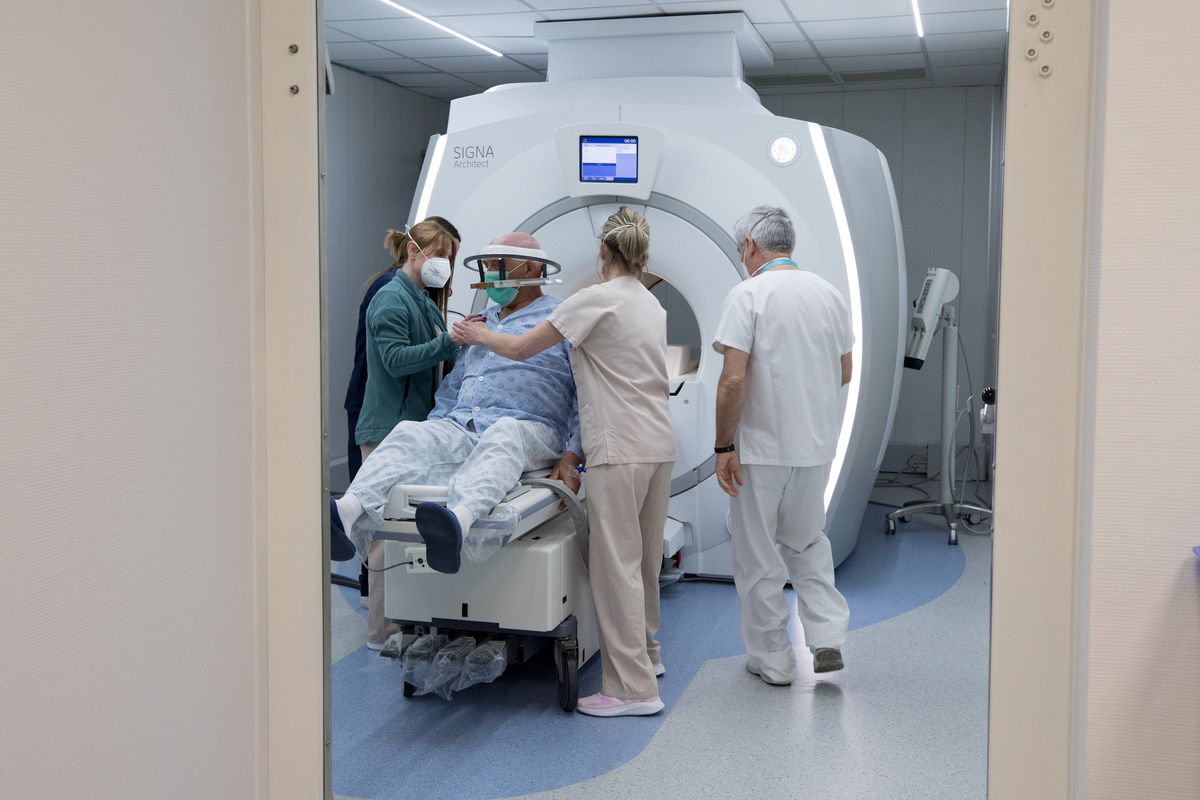 Emilio has suffered from refractory essential tremor for more than 30 years and the disease was “limiting his life” until he was unable to hold a glass of water without spilling it, drinking soup or setting up a piece of furniture. The first time he went to the doctor for his tremors he was 34 years old, but his condition worsened dramatically when he was over 60. The treatment with pills, according to him, instead of helping, made him “regress”, so as soon as he knew that the HIFU (High Intensity Focal Ultrasound) technique was going to arrive in Santiago, he asked to enter the machine.

This Thursday he entered the University Clinical Hospital and released the system. The intervention, which consists of concentrating high-energy ultrasound beams to produce a thermal lesion of less than three millimeters at the point of interest in the brain, lasted just under an hour. The results were immediate and this Friday morning the patient was discharged. His tremors have not disappeared, but he is able to do things that were already impossible for him, such as lifting a soup spoon to his mouth or drawing concentric circles. Emilio believes that if this technology had existed when he was younger, with his less advanced ailment, the upgrade would have practically returned him to the starting box.

This therapy for the treatment of essential tremor and Parkinson’s has existed in the world for five years and had already reached some private hospitals in Spain, but the HIFU technique in Santiago is the first in the public sphere. The Servizo Galego de Saúde (Sergas) announces “spectacular results, with great safety and with hardly any contraindications”. He assures that the technique is especially indicated for those patients in whom drugs are not effective or who cannot undergo surgery to perform deep brain stimulation (implantation of electrodes in the brain to activate the subthalamic nuclei).

Neurosurgeon Miguel Gelabert explains that the Compostela hospital is a reference center in Spain for movement disorders (which is why patients from other communities attend) and that it specializes in those surgeries that not all patients can undergo, including those from “advanced age”. In the operation, the skull must be pierced, he describes: “It is an invasive technique in which the patient must remain awake.” With ultrasounds, “you do more or less the same thing,” that is, you act at that point in the brain, but “without opening your head.”

As indicated by the Xunta de Galicia, in the five years of experience of this therapy in the world there is “a clinical improvement in tremor of more than 80% compared to its previous situation.” The effectiveness of a single session “is maintained over time” and “there is no age limit on its application.” The equipment and its assembly cost 1.8 million and neurologists, neurosurgeons and neuroradiologists participate in the interventions.

Only in Galicia, essential tremor and Parkinson’s affect about 4,000 people, and of them half have side effects or do not respond to drug treatment. Until now, only 45% of these had deep brain stimulation surgery as an alternative. Essential tremor can cause cognitive dysfunction and, in addition to the upper extremities, it can affect the voice. It is especially noticeable in moments of movement and action.

Parkinson’s disease occurs in multiple neural systems and its symptoms are usually tremor at rest, stiffness and loss of range and speed in movement, in addition to other consequences invisible to others such as pain or insomnia. In frequency, it is the second neurodegenerative disease (up to 5% of those over 85 years of age suffer from it) and it develops especially in the sixth and seventh decade of life, although up to 20% of cases manifest earlier.

Amazon drivers would be peeing in bottles to be complimented

Data obfuscation: if you can't avoid being tracked, cheat the algorithm