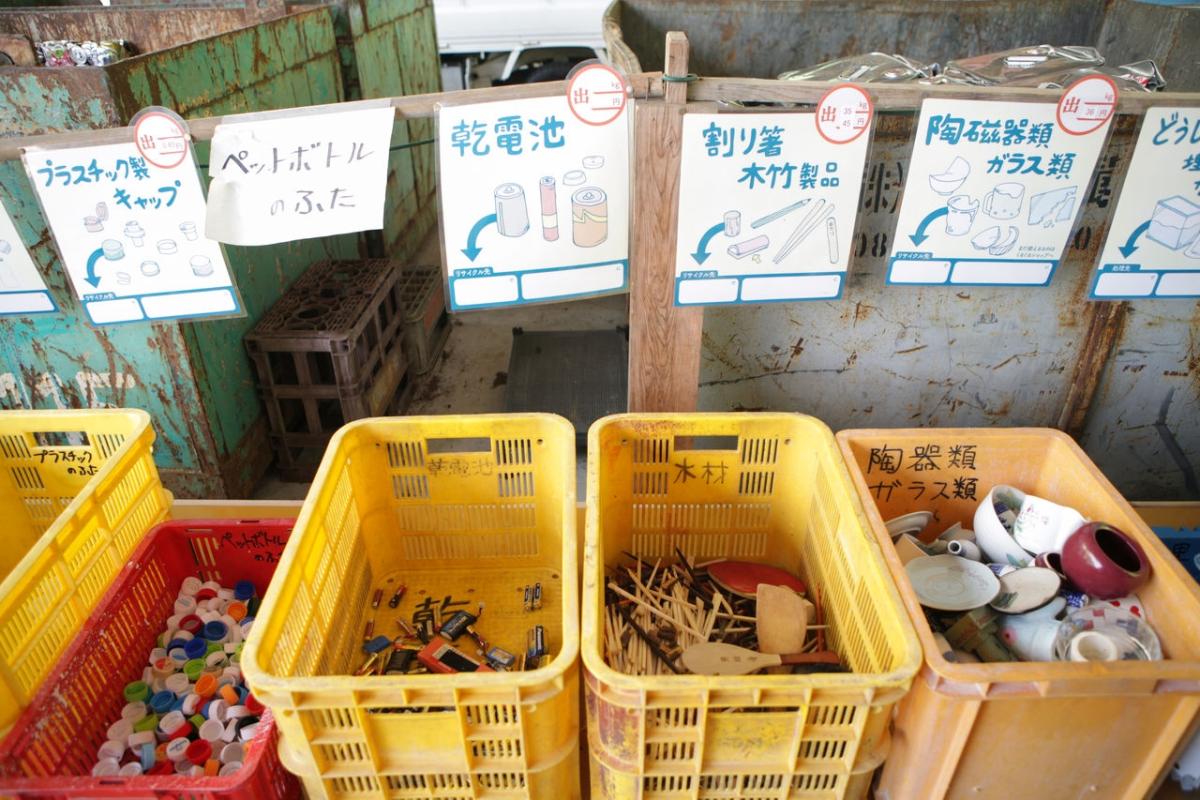 Does it cost you to recycle? The odyssey of recycling in Japan

The culture of cleaning and recycling is deeply rooted in Japan, and dates back to the twelfth century. There, if you don’t recycle, they give you a fine, there are up to 45 different categories of objects to recycle, and if you put a plastic cap in the wrong bag, the garbage can will not pick it up. A neighbor will leave the bag at your door with a nice note explaining what you have done wrong.

There is even the recycling police, which monitors the area where the waste is deposited, and reports if it sees any anomaly in them. There all garbage bags are semi-transparent, so you see what they contain.

In the 2018 World Cup in Russia, an image was recorded in the retina of the spectators who attended the games played by the Japan National Team. After the game was over, the Japanese fans they took out bags that they carried in their pockets, Y They collected all the garbage in the area they had assigned, until it was cleaner than before they arrived. You can see it in this video:

This is my favourite moment of the World Cup so far; Japan fans picking up litter after their victory vs Columbia. The lessons in life we can take from the game. Why I support 🇯🇵 #class✅#respect✅#WorldCup pic.twitter.com/FyYLhAGDbi

If you don’t like recycling and you think it requires an important effort here in Spain, wait until you know what the Japanese have to do …

Japan is an overpopulated and highly industrialized island. After the enormous economic growth that followed World War II, it became the second country in the world, after the United States, to more plastic waste and pollution generated.

Consumption guidelines are insufficient to deal with the amount of waste generated by humans, these 5 products are very polluting and you can avoid them.

They themselves are aware that they have contributed to pollution and climate change, and it will also be one of the most affected countries, because many of the populations on its coasts will be flooded by rising sea levels.

But the Japanese plans go much further. They have also announced that fuel cars will stop running in 2035, and the industry will be banned from emitting polluting gases in 2050.

Recycling is a modern activity, but the concept of don’t wasteMaking the most of all resources has been part of Japanese culture for centuries.

They use the expression Mottainai, What does it mean “sense of regret over inappropriate use of an object or resource“. It is a broad sentiment that refers to feel sorry or ashamed for wasting something: food or objects that are thrown away almost new, but also wasting time, a skill we have, or life itself.

It is a philosophy of life that already appears with this name in writings of the twelfth century, but it was very much in force in the Edo period of the samurai, in the seventeenth century.

There is a beautiful samurai story, which tells the BBC.

It is said that the Edo Period, which took place between 1603 and 1868, a samurai was required to wear the same kimono between 10 and 20 years, stitching up any tears or wear.

When the kimono was already useless it was used as a cleaning cloth. And when it was completely worn out, it was used as a wick to light the fire for cooking. Not even the ashes were wasted: they were used to clean the dishes.

Compact and portable vacuum cleaner with adapter to convert it into a broom vacuum cleaner. The brush has lights to better see the dust and a 2,600mAh battery.

A country without bins

To the Japanese tradition of taking advantage of resources and not wasting, the need to reduce plastic pollution and garbage was added, in the 60s of the last century. So the authorities set in motion the 4R campaign: Reduce, Reuse, Recycle and Respect.

Recycle in Japann has become a complex and time-consuming activity, based on a simple motto: you are responsible for your garbage.

Japanese streets are among the cleanest in the world, but what most attracts tourists is that there are no bins or sweepers. They are clean because if you have to throw a gum, a handkerchief or a bottle of water in the middle of the street, you put it in a bag and throw it in the trash at home.

You only see wastebaskets in fast food stores, shopping centers or in front of vending machines, but you can only throw away what you buy there. Throwing your own stuff is frowned upon.

Applying the same principle, there are no containers to throw garbage on the street, because you cannot download it at any time of the day, as we do here. Organic garbage is only collected there twice a week, and it can only be left a few hours before the truck passes. That is why the bags are left directly on the street.

It is a culture of recycling very different from ours, as we are going to see.

One of the things that most surprises foreigners moving to Japan, is that when they arrive at the new house the landlord has left them a multi-page brochure, written in multiple languages, where they are explained all the rules to follow to recycle correctly:

If you do not have the brochure, you should go and find it at the town hall. The reason is that in many cities recycling is mandatory, and if you don’t do it or do it wrong, you will be fined.

Does it seem too much for you to have to separate your garbage into organic, plastic and paper, as we do here? Every Japanese city hall has its own rules, but in most of them there are between 10 and 20 recycling categories.

You have to separate combustible and non-combustible waste, paper, cardboard, cans, aluminum, pet waste, plastics, bottles … Each one goes in its own bag of a different color with its name, so that garbage cans can easily recognize them, since as we have mentioned, no containers are used.

And this is just the beginning …

If you thought it was enough to separate the waste, you do not know the Japanese mentality.

Almost all municipalities require remove the cap, remove the label and wash the plastic bottles. The tetrabrik must be separated on the sides and folded. The cardboard boxes have to be folded and tied several together with a biodegradable plastic or a rope, or put them folded in another special box:

It is a slow and laborious process that all Japanese carry out selflessly and without complaint. Thanks to this, waste is recycled more efficiently, obtaining the highest recycling rate in the world, over 75% of everything they collect.

But the odyssey for the citizens is not over yet …

Another peculiarity of japanese recycling is that you can not go to throw the garbage when you feel like it, like here.

Each type of garbage has its day of the week: cans on Mondays, cardboard on Tuesdays, plastics on Wednesdays … It is so complex that most collection points have posters with calendar dates, and summary rules:

Usually organic waste is only collected two days a weekSo if it smells a bit … Well, hold on … That’s why many Japanese houses have their own airtight containers.

On the day it touches, the garbage or recycling material It can only be left on the street a few hours before, and before 8 in the morning. Although in some neighborhood communities there are private containers where you can throw the garbage at any time, and a worker is in charge of removing it in the required deadlines.

Many collection areas are delimited by a net, which must be lifted to dispose of the bag. Its function is to prevent birds from pecking the bags, especially crows.

In the case of large or non-recyclable objects such as furniture, appliances, etc., they will only collect them if you have put a special label with your name and address, in case they have to contact you.

And be careful not to put a cardboard box in the bottle bag, or a plastic one in the organic garbage: the garbage can will not collect it, and it will remain on the street.

Recycle in Japan is a civic activity, and is considered a community responsibility. As we have mentioned, garbage bags are semi-transparent, so what is inside is perfectly visible.

If a neighbor observes that you have recycled badly or you do not do it when you go down to throw the garbage, he will not tell you anything directly, because most Japanese are very shy about these things, especially with foreigners. But within minutes of returning home you will find your garbage bag at the door, with a kind note explaining why you are not recycling well.

The one who will scold you is the recycling police, a figure that exists in some neighborhoods and Japanese populations.

This city hall employee walks the streets at times when people dump their garbage. If you see someone who does it incorrectly, it informs you of the rules to follow. In some cities it has the capacity to impose fines.

Buying a broom vacuum cleaner is a great success and with our guide you will learn about the best models, characteristics and prices of these useful devices.

Perhaps the best example of the Japanese metallicity of the Mottainai, and discipline with recycling, is the small town of just 1,300 inhabitants, Kamikatsu.

It is one of the first populations in the world that has reached the Zero Waste objective. In other words, the villagers generate absolutely no waste.

But the conditions to achieve it are almost spartan. There garbage is separated into 45 different categories, in a process so elaborate that courses are even taught. Even printer inks and batteries are separated by markings. You can see it in this video:

In the town square a kind of recycling center, where neighbors go to leave recyclable objects.

There is also a second-hand market where neighbors sell what they do not use, or exchange it.

Even with non-recyclable objects create artistic items and sculptures which they then sell.

Recycling in Japan is a task that requires discipline and patienceBut the results are there: Japan is one of the world leaders in recycling performance.

Yeedi's new robot vacuum cleaners: why they are one of the best options on the market