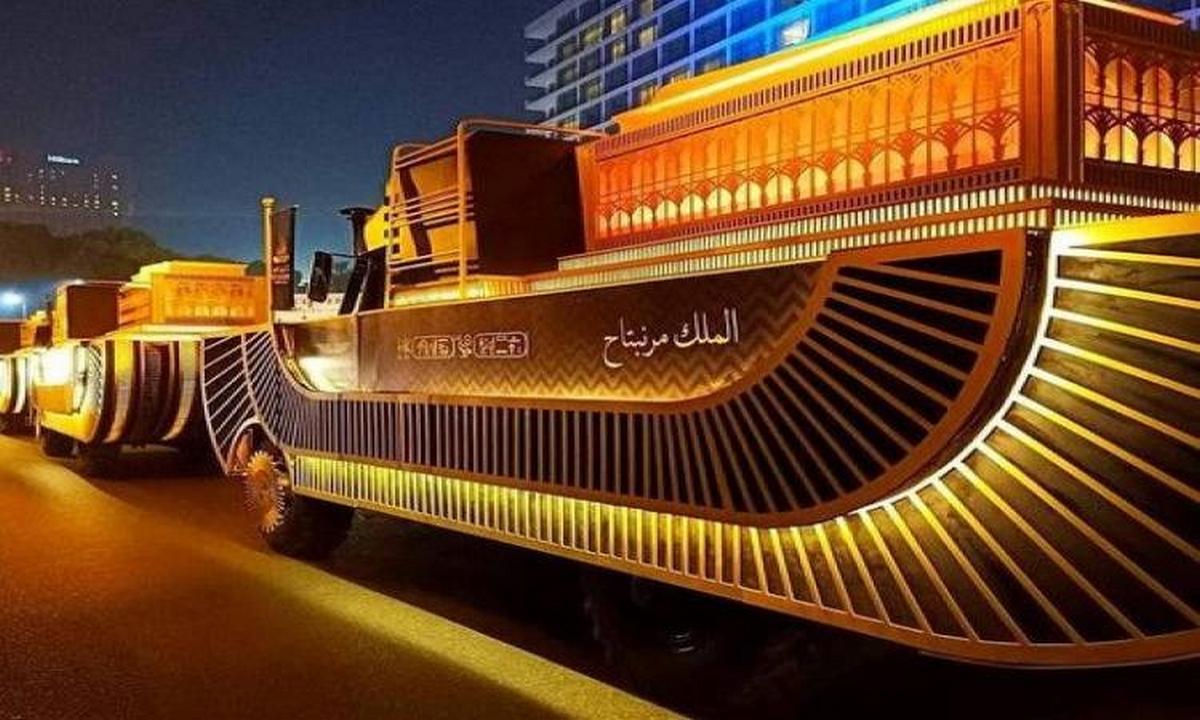 400 televisions will broadcast the Golden Parade of the Pharaohs: 18 pharaohs and 4 queens transported in floats

A full-fledged Cavalcade of Kings, Egyptian style. The mummies of 22 ancient kings and queens of Egypt, transferred in floats.

This week we will be able to enjoy a television and cultural show unique in the world. The Golden Parade of the Pharaohs. A total of 22 top-ranking Egyptian mummies to be moved from one museum to another in Cairo, and they are going to do it in the purest Hollywood style: with some extravagant floats that will parade in procession through the streets of the Egyptian capital.

An audiovisual show that nobody wants to miss: more than 400 televisions around the world will broadcast it live. An injection of confidence and optimism for the Egyptians, after the fiasco of the ship stranded in the Suez Canal.

Although we are almost to April 1, it is not a joke of the April Fools’ Day. Here you can see, in Spanish, the video of the Egyptian Ministry of Culture where it announces the Golden Parade of the Pharaohs:

As we see in the video, the parade will take place on April 3, that is, this Saturday.

The origin of the event has been the construction of the new National Museum of Egyptian Civilization (NMEC) in Al Fustat, a mega museum dedicated solely to the culture of the pharaohs.

The most important mummies are going to move from the current Egyptian Museum in Cairo to the new National Museum of Egyptian Civilization. It is only a few kilometers of travel, but instead of doing it in conventional trucks, Egypt has decided to make it a global event.

With a size of 55 inches and the latest OLED technology, the LG OLED E9 is one of LG’s top OLED televisions, but maintaining a very contained price for its category. This makes it one of the most interesting and attractive OLED televisions of the moment.

They have constructed some showy golden floats that will carry the sacorphages, each one with the name of the mummy it carries in Arabic and English:

In total they will be 18 pharaohs and 4 queens of Egypt. Among the confirmed names are mummies as important as that of Ramses II, his father Seti I, Tumotsis III, or the queens Hatshepsut and Nefertari.

The Golden Parade of the Pharaohs It will be enlivened with performances by Egyptian artists such as Mona Zaki, Sawsan Badr, Hussein Fahmy, or Yousra.

Although the new National Museum of Egyptian Civilization will open its doors to the public for the first time the following day, April 4, the mummies will not be on display immediately.

The cheapest mobile with a 108 megapixel camera that you can find. It also has a 6.4-inch AMOLED screen, Snapdragon 720G processor, 6 or 8 GB of RAM and 128 GB of storage. A beast with an unbeatable price.

They will remain 14 days isolated in a laboratory to remove any contamination from the outside. They will also take the opportunity to do some restorations.

They will then be exhibited at the Hall of the Royal Mummies, a museum room that is a kind of Valley of the Kings in miniature.

Remember, the Golden Parade of the Pharaohs will take place next saturday April 3, and will be broadcast live through the official YouTube channel Experience Egypt.

Xiaomi Mi TV LUX Transparent Edition, we have tested it: this transparent TV wants to be a demonstration of technological power