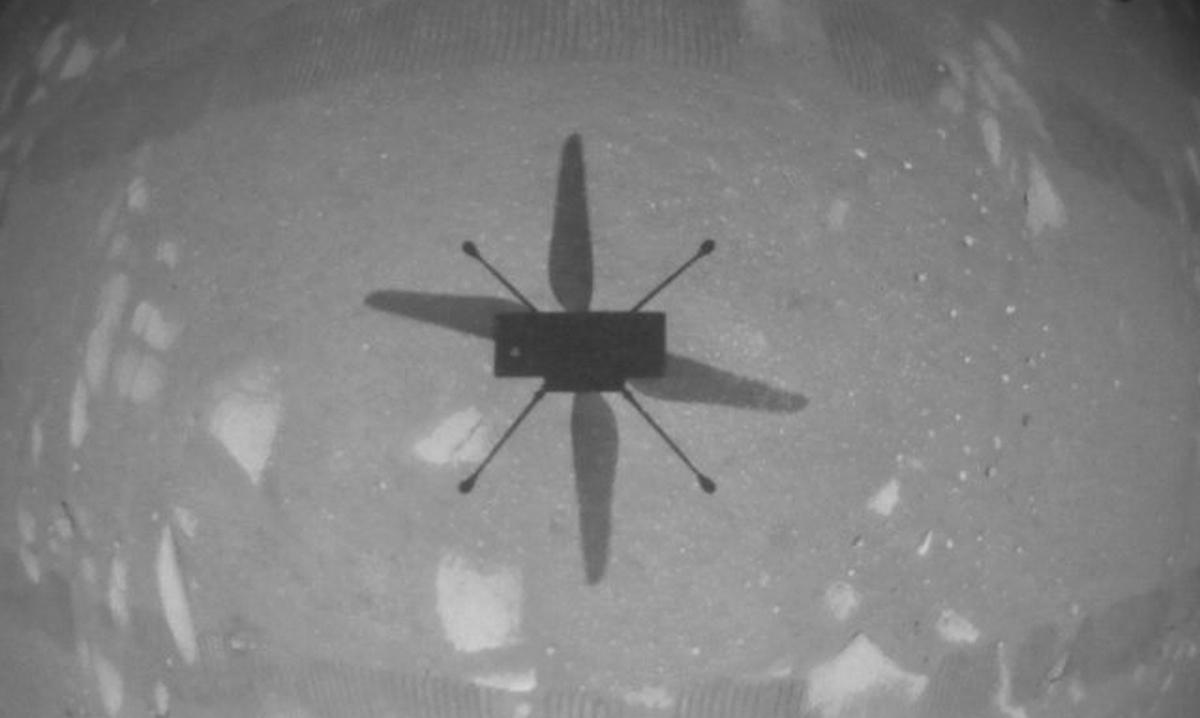 NASA makes history: this is the first flight of the Ingenuity helicopter over the surface of Mars

When you watch the video it seems extremely simple, but it is a feat: we have the first video of a helicopter flying on another planet.

At 9:34 am today, Monday, April 19, the Ingenuity helicopter took off from the surface of Mars, and flew for 30 seconds. Although the flight occurred a few hours ago, it was now that NASA received the video recorded by the Perseverance rover, as it had to travel 278 million kilometers to reach us.

It’s the highlight of the mission Mars 2020, which has put the Perseverance rover on Mars in a spectacular landing, worthy of Hollywood.

Here we can see the takeoff, flight and landing of the Ingenuity helicopter on Mars. The video is from just a few minutes ago:

Perhaps, at first glance, it does not seem too spectacular: Ingenuity rises three meters above the Martian soil, stays in the air for 30 seconds, and lands softly on its surface..

Almost all of us have done something similar with a homemade drone in the garden at home, but the implications and the difficulty of this extraterrestrial flight are extraordinary.

It is a flight of an autonomous and solar helicopter that has taken place 278 million kilometers from Earth, without human intervention.

The Perseverance rover deposited the helicopter at the Van Zyl Lookout in Jezero crater and moved 63 meters away to record it with its own camera. The video we have seen was recorded by Perseverance.

We thought we were the first Earthlings to step on the Moon, but dinosaurs could have done so millions of years earlier. No, it is not science fiction. It’s science …

When NASA technicians decided that they were the optimal weather conditions, with the MIDA weather station developed in Spain carrying the Perseverance, the Ingenuity helicopter started the main engine.

It is a takeoff that has nothing to do with flights on Earth, since on Mars the atmosphere is 90% lighter than on Earth, and gravity three times less. And the temperature never rises above 20 degrees below zero in this age. So you have to completely change the flight parameters.

This first flight of the Ingenuity is just that, a test. Are scheduled riskier flights where you will actually fly from one place to another and record it with your own camera.

“Now, 117 years after the Wright brothers managed to make the first flight on our planet, NASA’s Ingenuity helicopter has managed to perform this amazing feat on another world,” explains NASA Administrator Thomas Zurbuchen, in the press release. “While these two iconic moments in aviation history may be separated by time and 173 million miles by space, they will now be linked forever. As a tribute to Dayton’s two innovative bicycle manufacturers, this first of many airfields on other worlds will now be known as Wright Brothers Field, in recognition of the ingenuity and innovation that continue to fuel exploration. “

A new path opens up in space exploration: the possibility of using drones on the Moon and Mars, to help you explore the terrain and anticipate dangers or amazing discoveries.

Don't download pink WhatsApp! It is a hoax to 'hack it'