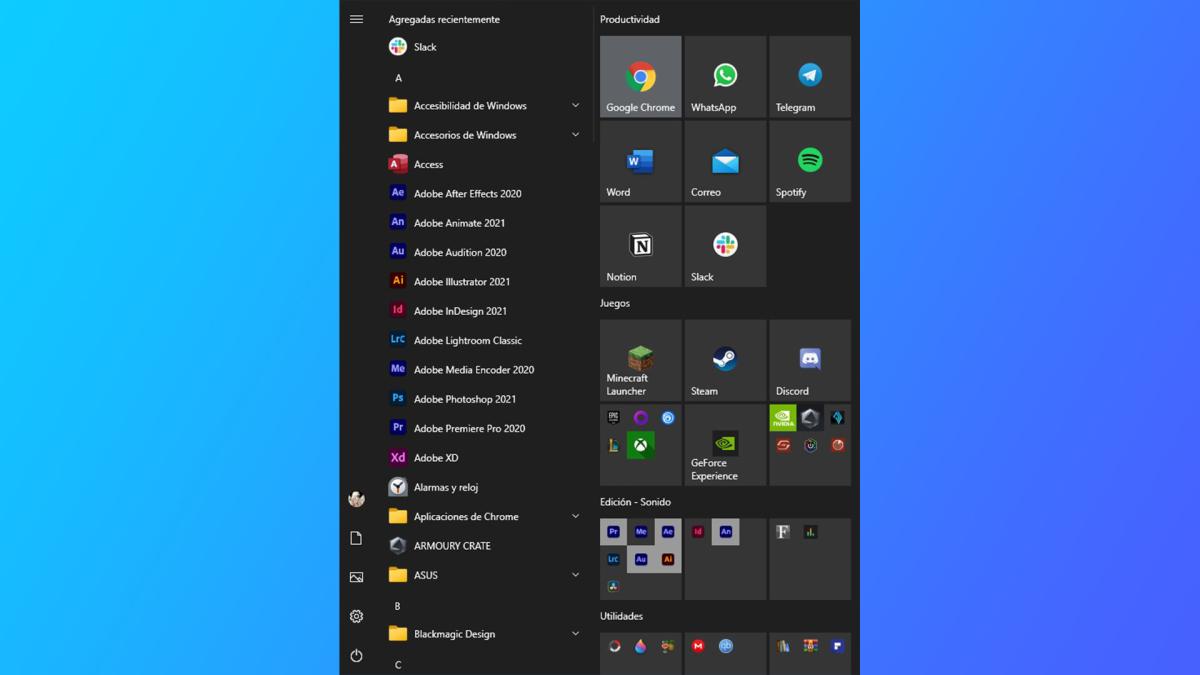 How to clean and organize the Windows 10 start menu

Keeping the shortcuts to programs or folders organized in the Windows start menu can save us precious minutes, we teach you how to customize this section.

The Windows start menu is usually a mess, few users bother to organize it according to their use of different applications, programs or folders. The most common is to leave this section exactly the same as the first time we turn on a computer with the Microsoft operating system.

Of course, organizing it is an option and it is totally recommended. We are going to teach you how to leave it to your liking and as clean as possible so that seeing it is a pleasure. The only thing you need, logically, is a Windows computer. Let’s go for it.

Choose what appears in the start menu

In the Windows start menu, a large number of elements appear, from recently installed applications such as the most used and those that we have placed manually. All of this is customizable and is done by going to settings, customization, and home. It is in the beginning where all the options appear that we can activate or deactivate as we deem appropriate.

Show more icons on startup: This option makes the Start menu space much larger and more icons can appear.

Show app list in start menu: This option shows all the applications that we have installed. It is advisable to have this deactivated so that Windows does not have to show everything we have installed whenever we access this menu, but if you use this option to find programs then leave it activated.

Show suggestions occasionally on Start: This option shows suggestions of applications that Windows considers that we can be useful.

Use Full Screen Home: activating this will make the Start menu appear on the entire screen and not just in one corner.

Show recently opened items from shortcut lists on Start or on the taskbar and in the File Explorer Quick Access: This option is self-explanatory, but what it does is that the elements that we have opened in a short period of time appear in the Start menu or in the quick access menu.

Choose which folders you want to appear on Start: allows you to choose the folders that appear in the Start menu. Clicking on this section will open another window in which we can configure the folders that we want to appear. You just have to select or deselect what you want, the ones that appear are the following: file explorer, settings, documents, downloads, music, images, videos, network and personal folder.

This would be the most basic when it comes to organizing the Windows Start menu. The interesting thing is that each one configures it to their liking. If you want to go deeper, what you should do is uninstall the applications or programs that you do not use, in addition to anchoring or unpinning those that you consider redundant. (if they appear in the Windows bar and also in the menu).

If, for example, you want to organize in folders within what is the Windows Start menu, there are two ways, the first is the simplest and is the one we all know: drag one program on top of another to form a folder. The second has a little more difficulty but not too much.

What you need to do is open two file explorer windows and place them side by side. In the first window we have to go to a specific path: C: Users (your username) AppData Roaming Microsoft Windows Start Menu. We will arrive at the folder where the application shortcuts are housed, so we can create a folder with specific accesses.

Configure and customize Start menu Windows 10 is something really simple, all we need is to give it a bit of enthusiasm and time. What’s more, All the effort invested is rewarded when, when entering that menu, the applications that are closest to hand are the ones that we use the most.

Netflix premieres in May 2021: 61 original series, films and documentaries