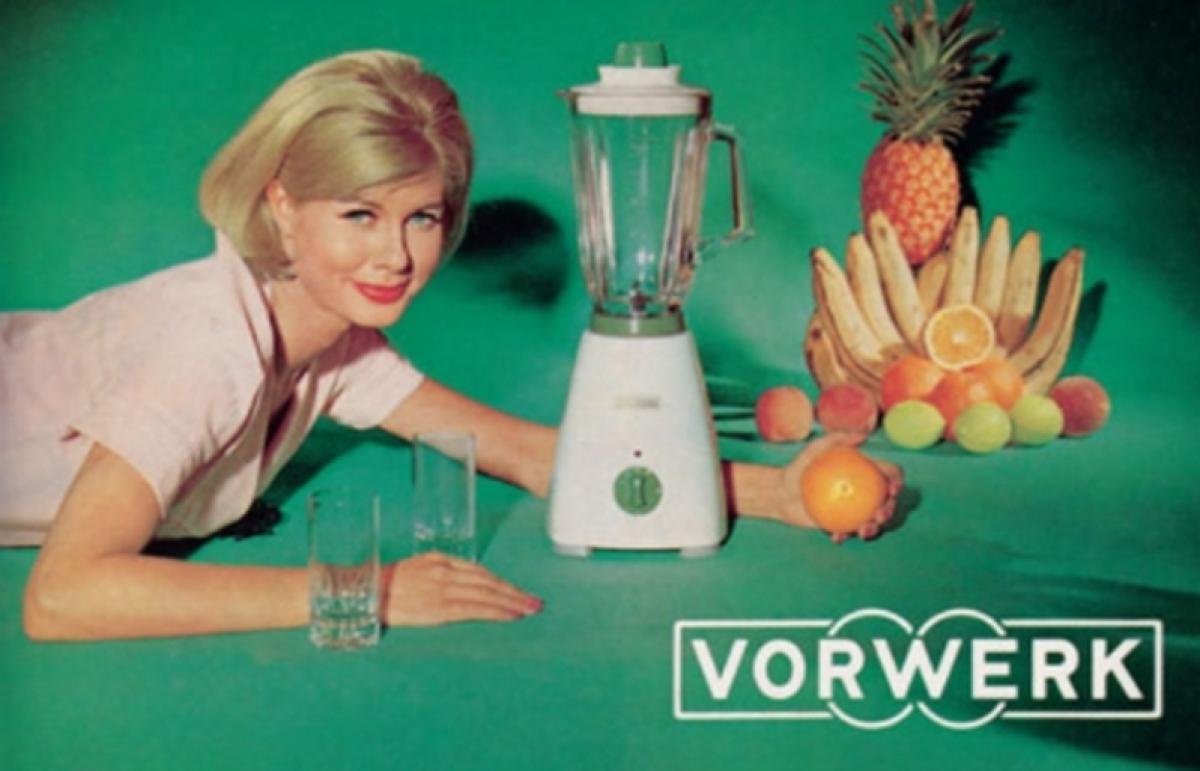 The curious history of Thermomix: from blender for thick soups to the world’s best-selling food processor

It is not very common for a new invention to hold its lead for decades. The most common is that when a product is successful, copies or variants appear, and the original idea ends up being surpassed by its imitators. It has not been so with the popular Thermomix, the best-selling kitchen robot for 60 years.

Vorwerk, the company that invented it and markets it, is over a century old, and its history is full of tragedies, incredible achievements and a peculiar way of marketing its products.

How was the Thermomix? How many models are there? Why has no one been able to overcome it? We will try to answer all these questions.

The first version appeared in 1961, although the true Thermomix, with the function of cooking the food that defines it, was not marketed until 1971. That is why this year it is 60 or 50 years old, depending on whether we take one model or another as a reference, as we are going to see.

The curious history of the Thermomix

The origins of Vorwerk, marked by tragedy

The company Barmer carpet factory Vorwerk & Co was founded by brothers Carl and Adolf Vorwerk, in Wuppertal (Germany, in 1883. Adolf left that same year, so the company was left in charge of Carl Vorwerk.

At first he was dedicated to sell carpets, upholstery, and the very looms with which the fabrics were made.

Unfortunately, tragedy soon struck the Vorwerk family. The founder, Carl Vorwerk passed away in 1907, at the age of 60. His successor should have been his son, but he passed away in 1904 when he was only 26 years old. So the company passed into the hands of Carl’s son-in-law, August Mittelsten Scheid. The company was ruled by his heirs until 1972, when presidents began to be elected on their merits.

Kitchen robots are a huge help in our diet to cut, chop, mix and, in short, prepare food without having to be aware of the entire process. In this guide you will find everything you need to know to decide on your purchase.

Vorwerk continued to manufacture rugs until World War I, where he had to dedicate himself to make machine guns. In wars it is common for states to recruit technology companies to manufacture weapons. IBM, for example, made rifles in World War II, and the camera maker Kodak, hand grenades.

After the war, the company diversified its catalog, going on to manufacture motors and parts for gramophones, the predecessor of the turntable.

With the popularization of radio, sales of gramophones plummeted. The company was in trouble, but engineer Engelbert Gorissen came up with a great idea: in 1930 modified a gramophone motor to create a vacuum cleaner.

Thus was born the Kobold product range, made up of vacuum cleaners and cleaning robots, which is still marketed today.

Half a million commercial agents

The Vorwerk vacuum cleaner was a very promising product, but it had a problem: people did not know that there was a machine to clean the floors in the house.

Werner Mittelsten Scheid, one of Carl Vorwerk’s descendants, came up with hire commercial agents to go house to house explaining what a vacuum cleaner is for. This is how Vorwerk became a direct selling company, his identity stamp from that moment.

The Thermomix, like other products of the company, not sold in stores. They are only sold through commercial agents, most of them self-employed (they do not belong to the company, who work on commission. They go to the houses to demonstrate to the clients.

Currently the company has around 12,000 employees and more than 500,000 commercial agents, in 70 countries. However, most of them are dedicated to selling the cosmetics of another of their companies, JAFRA. About 30,000 agents are dedicated to the sale of Thermomix. In Spain there are around 8,000.

It all started on a small farm in Småland, as a family business. The story of how IKEA became the world’s largest home products company is as fascinating as it is inspiring.

We had stayed in the mid-50s, with Vorwerk dedicated to the sale of carpets, upholstery and vacuum cleaners.

Looking for a way to diversify its products, in 1961 it commercialized a thick soup mixer called VKM5. This mixer could stir, knead, chop, grate, mix, grind and squeeze. Then he launched a more advanced model called VM 10.

It was very successful in France, a country known for its taste for cold soups. It was precisely there, in 1970, that the Managing Director of Vorwerk France came up with the idea of add a calantador so that the blender, in addition to mixing, could cook the food itself. A all in one that would make life more comfortable in the kitchen.

In 1971 the first real Thermomix was marketed, although it was not yet called that. His name was VM 2000, and premiered in France, Spain and Italy. Nowadays 75% of the Thermomix are made in France, and 25% in Germany.

You don’t have to spend a lot of money to buy a real espresso machine with milk frother. This Cecotec model is Amazon’s best seller and is worth less than 80 euros.

The term Thermomix did not begin to be used until the TM 3300 model, in 1982. In Portugal and Italy it is marketed under the name of Thermomix.

That is why we said in the introduction that Thermomix has turned 50 or 60 years old, according to what each one considers the first Thermomix. For many it is the VKM5 blender, marketed in 1961, but others think that the original was the VM 2000 (1971), because it was the first capable of cooking food.

We are going to see some highlights of the main models.

The first two models, marketed in 1960, they were basically a mixer / mixer. They could stir, knead, chop, grate, mix, grind, and squeeze. But they did not heat or cook.

Do you have a Thermomix? If you want to get the most out of your food processor, take note of these quick tricks that you have to know without fail.

This is, objectively, the first complete Thermomix, since the VM 2000 was the first model that could heat and cook food.

As we see, it is basically a mixer with a heater / stove underneath. The controls are reduced to two wheels. We assume that one is for the mixer, and the other is for regulating the heat.

We include this model for reference, as we don’t have much data.

Stands out because is the first to be called Thermomix. We see how the wheels have been moved to the side, with three different controls: timer, temperature, and mixer speed.

This model it was 10 years in the market. In a space little more than a sheet of paper, you can prepare all kinds of recipes, without any other utensils.

It is the first model to replace the rotary pushbuttons with buttons that are pressed, and that allow you to control many more functions.

Like all previous models, it worked completely manually, by pressing buttons. Guided recipes did not exist.

He was the first to include a small computer and a touch screen so that the user can follow the recipe step by step.

Through an optional WiFi module you can connect to the Internet to receive new recipes (by subscription), and update functions.

In the latest model released by Vorwerk. Releases new features, such as the long-awaited slow cooking, fermentation and sous vide mode.

It also has a bigger glass, 2.2 liters compared to 2 liters of the previous models.

If you want to know more, read our analysis on this card.

We tested the Thermomix TM6 food processor, the best-selling appliance in its area that never ceases to amaze with its ease of use and performance. We analyze pros and cons, as well as who may be interested in having it in their kitchen.

Currently Vorwerk is a business group made up of 27 companies.

Curiously, and despite being an expensive product for the average salary in Spain, our country is the third largest Thermomix market in the world, after France and Germany.

In Spain about 200,000 Thermomix are sold per year, and it is estimated that more than three million have already been sold, among all models.

If you want to have a terrifying time under the blanket and eating popcorn, here is a selection of the best streaming horror movies.

Why is the Thermomix successful?

We have seen the evolution of Thermomix, but that does not explain its enormous success, with more than 10 million robots sold. Nor why is it still number 1, now that there are dozens of copycats.

The reason is a sum of causes.

The first key to the success of Thermomix is the perfect combination of recipe preparation and cooking. It has dozens of functions (knead, chop, caramelize, chop, etc.), and, at the same time, various types of cooking.

Following the recipe step by step, even a novice in the kitchen can prepare quite elaborate dishes, and of great quality, in a very simple way.

It also saves time on washing and cleaning, because you don’t have to use extra pans or pots.

Commercial agents are the lifeblood of Thermomix, and an important part of its success. They are more compelling than a TV ad or a website. It is shown that Live presentations, even in the customer’s own home, help sell products.

There’s a reason only 10 models have been marketed in 60 years: Vorwerk spends years researching it.

More than 120 engineers and 800 chefs they devise improvements to the functions and adapt recipes to work with the Thermomix.

Everything is thought out to the last detail.

As important as the robot itself, is that there are adapted recipes to be able to prepare them with it. Vorwerk has spent years working with hundreds of chefs from around the world, including the most prestigious chefs, to adapt more than 50,000 recipes of all kinds: soups, stews, pasta, cakes, sweets, and a long etcetera.

It is true that now it is necessary to pay a subscription to have access to all the recipes (there are about 400 free), but there is no denying the enormous effort behind it.

It is the other pillar of the Thermomix: magazines, websites, blogs, forums … Users exchange recipes, experiences, tricks, and thanks to word of mouth they attract new customers.

All these keys make of Thermomix the most widely used kitchen robot, and the most popular. It is not a cheap product, but it certainly helps you eat better and more varied, while reducing the time you spend in the kitchen.

Deleting some 'cookies' is not enough. The technological ones have to go further