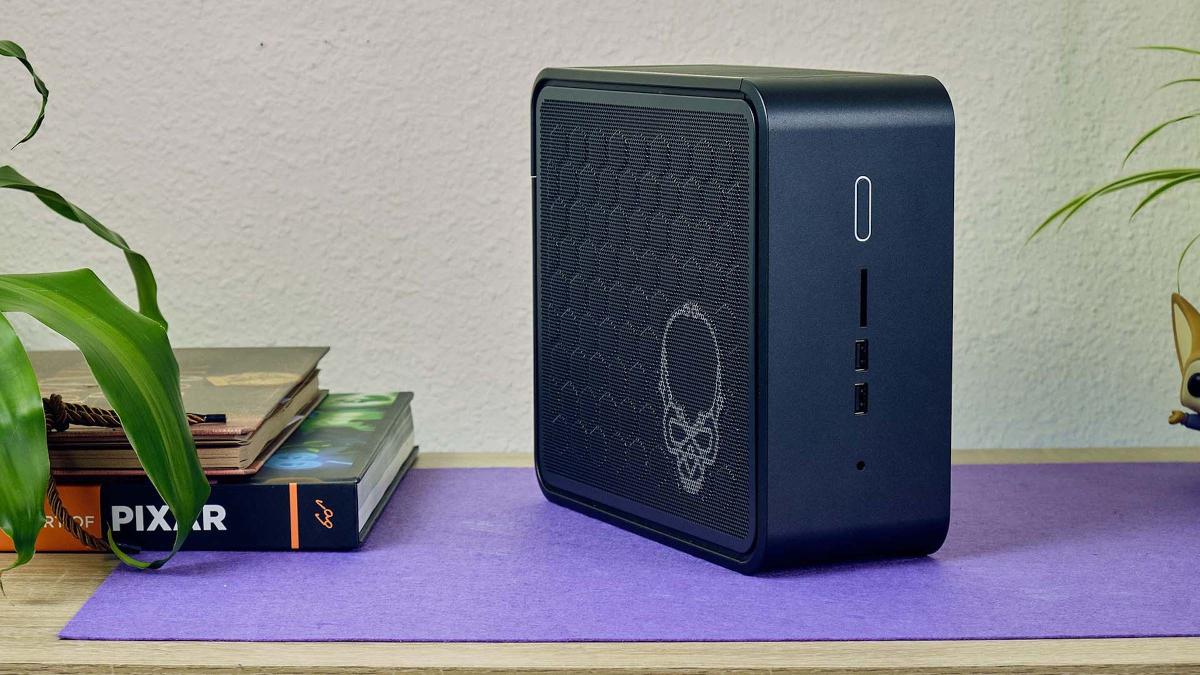 A few years ago, Valve created the Steam Machines. There were several models, formats and powers for machines whose concept was quite strange. Valve wanted to challenge consoles with a living room PC that looked like a console and with a version of Steam that served as a desktop, but they were still computers.

In nice boxes, very cool, but computers with interchangeable parts. They hit a bump despite having brands like Alienware, among others, creating the hardware and in the end, both the Steam Machines and the controller ended up at a bargain price.

However, It is still very interesting to put a powerful and complete PC in a box the size of a console to be able to enjoy games with modular components and, precisely, that is what Intel does with its NUCs.

Then We leave you our opinion of the Intel NUC 9 Extreme in this analysis in which we have been able to play a version of the hardware with an Asus RTX 2070 and 8 GB of RAM.

Analysis of the Intel NUC 9 by sections:

Spectacular design and with customization by flag

Buying a NUC is an investment. There are different types and we have the simplest NUCs that, basically, are the rivals of Apple’s Mac Mini Being a processor, a very small box and the right components to start working, but we also have the most complex ones, like these from the gaming series.

The concept of the NUC is spectacular because it was a tiny box with integrated power that allowed you to enjoy games, yes, but not to the maximum. It was not customizable or modular, but In 2020, Intel decided to expand the size of the box to create the NUC 9 Extreme that we have in hand.

Now we can say that it is a platform, since it does not differ too much from the miniITX PC, but it has an element that was not in the previous NUCs: a discrete GPU.

Before looking at the performance and components, let’s go to the design. On the outside, we have a box that has small perforations on the sides to improve air flow, something vital in this team because it has very powerful components and very close together.

On these aluminum side grilles, we have the Intel NUC logo, that traditional skull that does not match all living rooms and, at the top, a hot air exhaust grille.

Virtually everything on this PC is modular and it is very easy to disassemble if at any time we want to clean a component. The upper part is the heatsink module, with two active fans that expel heat.

Something curious is that they do not go to the board connected by cables, but with a connector that allows everything to fit together as if it were a LEGO.

Inside, we have two other modules. One of them is the graphics card, the Asus RTX 2070 Mini, although we can put any GPU that meets the specifications (about 20 cm long and two PCIe slots).

The other module is the PC, since it has the board, the processor, the RAM and the SSD. And yes, we can also disassemble it to clean it or change the RAM or storage if we want, although I think most target users will be more than satisfied with the factory settings.

And what there is … is what you see, since if we remove the GPU module, the PC and the fans, it is simply the chassis with the front and rear connections, as well as the lower PCIe ports to connect each module and the power supply.

If you have little space and want a computer to work or study, these Mini PCs are perfect, and they all come with Windows 10 pre-installed.

It is a very simple concept if we explain it like this, but it really is cool and tremendously complex to create. Hence its price, of course.

This is a desktop computer that mixes laptop and desktop components, but with advantages over the same processor mounted on a laptop thanks to the power supplied by the source and, above all, dissipation.

The processor is the i9-9980HK, one of Intel’s most impressive processors for laptops a few months ago with 8 cores at 2.4 GHz, 16 threads and a 5 GHz boost. The TDP is still portable, with 45 W and a 14 nanometer lithography.

The memory is DDR4 and we can change it, as well as the M.2 SSD. The GPU itself is a desktop, a very small Asus RTX 2070 Mini with two fans.

And I know that the comparison is not going to be fair because the processor is laptop, but the GPU is not and the power is powerful, but I am going to compare the performance of this NUC with some of the more powerful notebooks that have passed my hands lately: the Razer Blade 15 and the Two Samsung SE.

It is not going to be a comparison to tell you “you have to buy one or the other”, but so that you have an overview of the performance of these components in teams that, on the other hand, are not common.

Here are the numbers:

The numbers, numbers are and they let us see that the processor, despite being from 2019, continues to perform at a high level and the GPU, although it doesn’t quite match the RTX 3080 Max-Q, it holds up very, very well and does outperform the RTX 2080 Super Max-Q.

We liked the speed of the SSD, especially for the consistency between reading and writing:

And about the operating system we cannot say anything, since Windows 10 does not present bloatware.

A beast to play at 1,440p with ray tracing and DLSS

But let’s get to what matters, gaming performance. I already tell you that you will be able to play practically everything in ultra and with ray tracing at more than 60 frames per second at 1,080p, but with this hardware we wanted to test a 1,440p monitor.

The result of average frames per second is as follows:

We have some numbers according to both the resolution and the hardware that we have in hand and the games that stay below 60 fps are Battlefield V and Control.

The first because its ray tracing implementation is very, very heavy. It is not at all optimized and it is a game that has paid the price of being one of the first with ray tracing. Electronic Arts, in addition, has not updated the software to consume less resources.

Control, for its part, is a title that, with ray tracing activated in ultra, is one of the most demanding since it has a complete implementation of this technology. Still, having 34 FPS on average on this rig at 1,440p is a very good rate.

how do you see, in games that are not exactly light, the NUC 9 Extreme performs wonderfully.

Temperature is the Achilles heel of a size-driven gaming PC

The NUC 9 Extreme is expensive and much of the blame is on the heat dissipation system. We have already seen that the GPU has its two fans, we have two other fans that draw hot air at the top and the CPU, RAM and SSD module also has a fan, but in this case it is to cool a steam chamber.

We have seen this steam chamber in several devices and it is a great solution when space is limited. In consoles we have the One X and Series X -analysis- that use this solution. It is something made to measure and, of course, that makes the product more expensive.

And it works well, really. You are going to see that the CPU reaches 100º in several games, but it really is a component that is not uncomfortable at that temperature and, even if it reaches 100º, the performance is theoretically greater than that of the same processor in a laptop without this energy and dissipation solution, and that would also reach 100º.

This temperature is the maximum that the measurement programs represent, by the way.

The GPU stays at a very comfortable 73º of maximum and, in fact, it appears that it is limited to that temperature so as not to stress the component. And yes, the NUC 9 Extreme sounds loud when loaded, something totally normal since we have a total of 5 fans in a very small space, but they do well.

Now if I say that I like it … why do I claim that it is the Achilles heel? First because of the noise, as I say, and secondly because the processor, surely, could give something more of itself with a dissipation system with liquid metal, for example, as we have seen in some Asus laptops or in PS5 -analysis-.

Thus, surely we would not be seeing those 100º in our tests and we could try some OC to a processor that must be a beast with adequate dissipation.

The heir machine of the most interesting Steam Machines

I do not like, nothing at all, the hackneyed phrase “this device is not for everyone”, but it is something that is strictly enforced here. The NUC 9 Extreme is not a product for everyone.

For 2,000 euros you can mount a PC with better dissipation, more power and, above all, more customizable for the future as it is more compatible with new graphics and other components. Now, manually building a PC in pieces as compact as this NUC to compete against a console is something very complicated.

And there is precisely the advantage of this NUC 9 Extreme. It is, basically, that, a “console” with many quotes, but with Windows 10 and that, despite the design with the skull, fits very well next to, or behind, a television.

Along with a controller, a keyboard and a wireless mouse, we have a very good substitute for a console like One X or PS4 Pro with the advantage of the entire catalog of PC games, like the strategy ones that we don’t see on consoles.

The NUC 9 Extreme is one of the most curious gaming PCs on the market. It is a modular computer that we can configure and that comes with a very powerful laptop processor and the RTX 2070.

It is such a unique product that we cannot recommend or not recommend it, since it will depend a lot on your tastes and needs. What we can say without pinching our fingers is that the performance is fantastic, that the components are of quality and that it is clear that it is a well thought-out product, something that is noticeable when we open the NUC.

A very particular product and that, as a gamer that I consider myself, I am missing (since yes, the things that give us analysis are taken away when we try them).

Free download Control for PC, one of the best games of recent years

'Nobel Run': the Spanish board game that puts you in the shoes of a scientist fighting with papers to win the Nobel