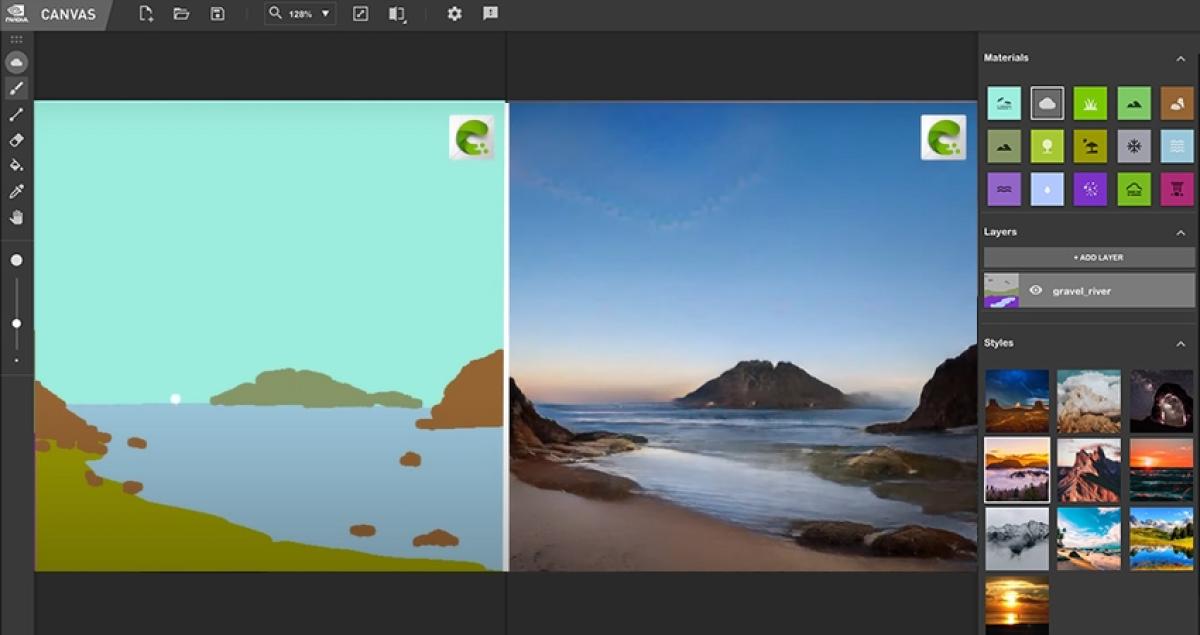 If you are not good at drawing, or photography, no problem. NVIDIA AI helps you out.

You just have to do a couple of blips, and the AI ​​will convert them into a photographic image based on the sketch you’ve created. Is not a copy and paste of existing photos, but a completely new image that AI is invented, while you are drawing.

To better understand it and see how spectacular it is, it is worth watching this video, where some examples materialize:

As we can see, with NVIDIA Canvas we do not paint strokes of color. We paint mountains, rocks, clouds or seas.

We simply have to select the texture we want to use (trees, rocks, grass, etc.), and when painting the sketch on a freehand canvas, the AI ​​turns it into a photograph with exactly the same shape as the sketch.

The objective of the generator is to convert the sketches into images. The discriminator knows that real ponds and lakes contain reflections and tells the generator to create a compelling imitation. To deliver realistic results, GauGAN has trained on an NVIDIA DGX system using over 5 million images.

As we can see in the video, GauGAN not only cuts and pastes pieces of trees, mountains or lakes, but also generates them based on the lines, and adds realistic elements, such as the shadow of some objects on others, or how they are reflected in the water. .

The beta of NVIDIA Canvas is it availabe to download for free, but unfortunately it requires an NVIDIA Geforce RTX graphics card, which has been out of stock for months or with an embarrassing overpricing, motivated by cryptocurrency speculators, and the semiconductor crisis.

John McAfee found dead in a prison in Catalonia: he was awaiting his extradition to the United States