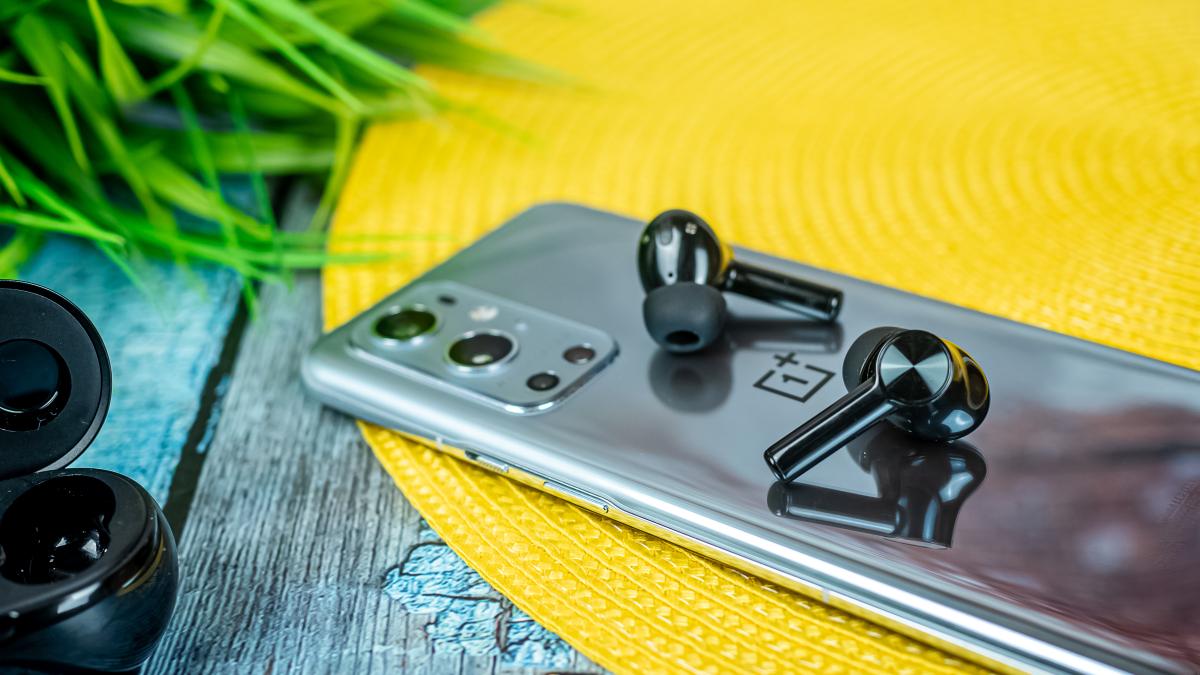 OnePlus takes the first step in updating its range of auriculares True Wireless and he does it hand in hand with the OnePlus Buds Z2, that is, in its mid-range.

The truth is that in this new update of the Buds Z2 We did not find great improvements and innovations, but OnePlus takes a step forward to get a little closer to the performance of its high end bluetooth headphones.

The new evolution of the Buds Z is just one step behind the OnePlus Buds Pro –Which we analyze here- and it is so close that there is barely a 20-euro difference between the two models.

With an introductory price of 99 euros the Buds Z2 have their older brothers as their main adversary. Will they be worth it? We discover it in this analysis and we give you our opinion.

Analysis of the OnePlus Buds Z2 by sections:

If we take the previous OnePlus Buds Z as a reference in the design, we can see few differences with the evolution of the OnePlus Buds Z2.

Seen separately they are practically identical since they maintain the same style and finishes. Of course, in short distances and with a more detailed observation, there are small differences between them.

They maintain a cane-like design, but this stem is a few millimeters shorter on the Buds Z2 and dispenses with the microphones that the previous model included at the end of the cane and under the touch zone, which sports the same concentric gloss finish as the previous model.

On the inside we have some news, the two charging pins and the microphone for noise cancellation are kept and a small grill is added. This inner part ends with an interchangeable silicone tip that, in order to obtain a correct fit and prevent it from moving, must be the correct size.

Few novelties in the finishes since the OnePlus Buds Z2 are available in Obsidian Black finishes Y White pearl. In our case we are testing the glossy black version and we have to say that they are a real magnet for fingerprints and do not stay clean for long.

The original Buds Z were characterized by being quite comfortable and the Buds Z2 follow that path. Nails on dimensions 33 x 22.4 x 21.8 mm and a 4.6 gram weight per headset they offer a good user experience with which I have not had problems using it for a whole day of work without noticing any discomfort.

Gestures work great and an acoustic warning confirms that the various interactions have been detected. In the next section we will tell you how these gestures are customized from the control app.

What’s more, have IP55 protection, which allows you to use them for sports without worrying about damaging them with sweat or rain. The baton format allows you to gain stability and will not have moved from your site with use.

OnePlus has kept the exact same capsule-like design in an oval case that sports the same glossy finish as the earbuds. It seems to us a very good design since it hardly takes place in the pocket, it only weighs 42 grams and provides a very good additional autonomy.

On the back of the case we find a Type-C USB charging connector and a discreet pairing button that, when held down, activates Pairing mode to pair with devices.

On the front there is a small LED that indicates the status of the case when it is charging or if it enters Pairing mode by flashing white. We would have liked to have a reference in the form of an LED light indicating the charge level of the case, but it is not a great inconvenience since it offers that information in the app.

The headphones fit inside the case precisely thanks to a magnetic system that prevents them from moving during charging and keeps them in the correct position. The case has less protection against splashes with an IPX4 certification.

As was the case with previous generations and in the rest of the models, the OnePlus headphones are compatible with Android and iOS devices, but when they are paired with a OnePlus mobile, everything is much easier.

In most mobiles all control of the headphones will fall on the app Hey Melody available in official stores of Android e iOS.

In the app I don’t just know shows in detail the information of the charge status of each of the headphones, it also shows the charge of the case. Something that we have found really useful to avoid surprises.

From the app too headphone control gestures can be configured, being able to customize the action that is carried out by giving one, two or three touches on the touch surface of each of the headphones.

We liked having this variety of options, including the invocation of the voice assistant, but not so much that others that we consider essential in a headset of this type are not available. We give as an example the control to raise or lower the volume.

With the OnePlus Buds Z2 you will have to take your mobile out of your pocket or backpack for something as basic and common as changing the volume.

It also has a Transparency, in which the microphones pick up the ambient sound and let it pass directly into the ear canal, so it is as if you were not wearing headphones.

To ensure a proper fit and efficient noise cancellation, the app performs a headphone fit check and, depending on the result, recommends using a more suitable silicone tip to optimize insulation.

The OnePlus mobile users will save themselves having to install the Hey Melody app and you will get all these functions built into the OnePlus Buds Z2’s setting menu in the Android Bluetooth connectivity menu.

By making use of the Fast Pair connectivity, you can directly access the controls of the headphones by tapping on the pop-up window that appears when opening the charging case with the headphones inside.

Also has advantages of using a OnePlus mobile and use the Game Mode of these mobiles to activate low latency mode which practically eliminates latency. In the latest Apple phones, latency has not been a problem either thanks to the good performance of the Bluetooth 5.2 standard.

We have used the OnePlus Buds Z2 with laptops, tablets and mobiles of different brands and, although it is true that are better integrated with OnePlus mobiles, the experience has been very good with all of them.

They are somewhat less tolerant of straying away from the sound source than other headphones we’ve reviewed lately and It is enough to slightly exceed the 10 meters that are established as the limit for Bluetooth for the first cuts to appear in transmission.

The most notable leap of this new model is undoubtedly found in the sound quality. This is perhaps one of the features that brings it the closest to the OnePlus Buds Pro.

For starters, the previous generation 10mm dynamic drivers have been replaced with a few drivers de 11 mm like the ones its high-end older brother rides.

This improvement in the drivers has made possible a better representation of all frequencies, and It suits great styles where the basses have a lot of presence such as electronic or urban music where the original Buds Z lost some energy.

The ubiquitous bass of an eighties Levitating from Dua Lipa They fail to intimidate the Buds Z2 who maintain the type while preserving the depth expected in some very present percussions, and they do so without overshadowing the voice of the interpreter.

Noise cancellation ranks just below the Buds Pro, eliminating the Smart Cancel mode. However, it is good enough for the price range that Buds Z2 cover with rivals such as Nothing Ear 1 –which we analyze here-.

We have tested them on a high-speed train and the result has been good, although it has not achieved the level of silence that the Buds Pro or the Soundcore Liberty Air 2 Pro –Analysis– that move in similar price ranges.

In calls the audio is correct, with a certain metallic tone that varies depending on the quality of the line. Undoubtedly it is not one of its strong points, but it is within the acceptable range.

Few changes in terms of autonomy since the OnePlus Buds Z2 trace point by point the numbers of the OnePlus Buds Pro in terms of the duration of each charge and capacity of the case. As is usual in noise-canceling headphones, activating it has an energy cost, shortening the time of use.

Thus, with noise cancellation activated we have been able to use them for a little over 4 and a half hours at medium volume. Very close to the 5 hours that they promise from OnePlus. If we disconnect the cancellation, the use time is extended to beyond 6 hours.

The OnePlus Buds Z2 have needed 45 minutes to recover 100% of your charge, with an initial thrust that recovers a 20% in just 5 minutes. The case provides more than four additional charges, leaving a remarkable autonomy with acceptable charging times.

We come to the end of this OnePlus Buds Z2 review and we have no doubt about the improvement represented by this review of the mid-range headphones from OnePlus.

The Buds Z2 take a step forward breathing in the neck of the headphones their older brothers, maintaining the strengths of the previous model and implementing some improvements to cover their weaknesses.

Active noise cancellation was a must have and the improvement in performance with the incorporation of larger drivers makes you win many integers. This puts them back in the running for the mid-range on an equal footing with their main rivals.

However, these improvements have not been free. The OnePlus Buds Z2 arrive with an increase of 30 euros in their starting price compared to the launch price of its predecessors.

The OnePlus Buds Z2 are the new totally wireless Bluetooth headphones with active noise cancellation that allow a greater range of frequencies to be reproduced thanks to its 11 mm drivers and have an autonomy of up to 38 hours thanks to its charging case and allow up to 7 hours of use on one charge.

The 99 euros that cost in its first weeks of use make it a very interesting option –especially if you use a OnePlus mobile– to obtain a good sound quality for a reasonable price.

However, this price collides head-on with the 116 euros that cost about OnePlus Buds Pro that already mark their last bars before the renovation offering superior performance. The OnePlus Buds Z2 have their main adversary among their ranks.

If you like to record TV programs, this DTT does it and it also costs less than 20 euros

Two to Four Bedrooms and Unfurnished: A Look at Hong Kong's Tech Mini-Floors with Smart Storage